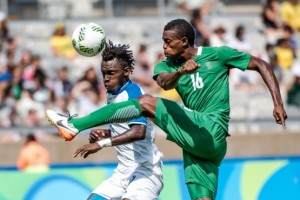 Nigeria claimed men’s football bronze at the Rio Olympics with an entertaining 3-2 win over Honduras in Belo Horizonte on Saturday to deny the Central Americans their first ever Olympic medal.

Honduras battled until the end, though, as Anthony Lozano and Marcelo Pereira headed home in the final 20 minutes to set up a nervy finish for the 1996 gold medal winners.

Hosts Brazil are aiming for their first ever football gold medal in one of the most anticipated events of the Games against world champions Germany at Rio’s Maracana with kick-off at 1730 local time (2030GMT).