Actress Funke Akindele and JJC Skillz were pictured for the first time together after their secret wedding last week.

Funke Akindele popularly called Jenifa walked down the aisle with her lover of many months, Abdul Rasheed Bello (better known as Skillz) at a registry in London (United Kingdom)., because both have been previously married, they decided to tied the knot in secret and out of the prying eyes of Nigerians, added another source.

The “FAB” nickname is believed to be an acronym for the newly married Funke- Funke Akindele Bello with Bello being JJC’s surname.

The excited birthday girl responded saying, “Thanks my love. God bless us”.

She went further to reveal her first 39th birthday gift from her man in a picture she posted on her snapchat handle with the caption: “Birthday gift came early from le boo. Love you.”

Funke has been in the industry for the best part of a decade but has recently become a household name thanks to her smash-hit movie Jenifa and other leading roles she has acted.

Meanwhile her producer beau has also spent some time in front of the spotlight with chart-topping singles and performances.

Congratulations to both the Akindele and Bello families, coming together in such a romantic, no-one-needs-to-know-but-us fashion!

A colleague of the actress revealed  that, the couple opted for a secret wedding after observing from a distance how rumour mongers almost ruinedthe wedding of Seyi Tinubu to Layal Holm by exposing their dirty secrets just days to their wedding.

Recall, Funke Akindele was once married to Kehinde Almaroof Oloyede, a property developer in the city of Lagos, while Skillz has four children from three women, and also didn’t enjoy his previous relationships.

The newly wed reportedly got engaged back in February after dating for about a while. Reports of a secret wedding first surfaced in May but neither JJC nor Funke Akindele confirmed the report. 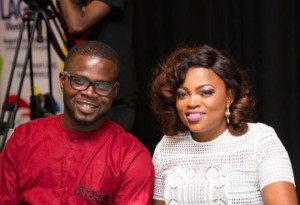