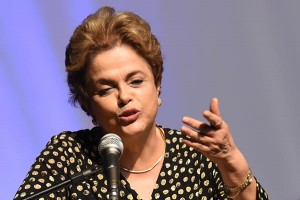 ‘If to say this woman na Naija woman she for sidon kampe nothing for happen instead na the senators dem go recall back to their village. Different stroke for different folks.’…this sums up feelings of Nigerians as Brazil’s Senate  voted to remove President Dilma Rousseff from office for manipulating the budget.
It puts an end to 13 years in power of her left-wing Workers’ Party.
Rousseff denies the charges.
Sixty-one senators voted in favour of her impeachment and 20 against, meeting the two-thirds majority needed to remove her from the presidency.
Acting President Michel Temer will serve out Rousseff’s term, which ends on January 1, 2019.
Temer, from the centre-right PMDB party, is expected to be officially sworn in later on Wednesday.
Rousseff had been suspended in May after the Senate voted to go ahead with the impeachment process.
She was accused of moving funds between government budgets, which is illegal under Brazilian law.
Her critics said she was trying to plug deficit holes in popular social programmes to boost her chances of being re-elected for a second term in October 2014.

….Brazil’s Senate has voted in favour of permanently removing President Dilma Rousseff from her office, in an impeachment trial set to end 13 years of leftist rule in the country, Al Jazeera reports.

Sixty-one of 81 senators voted against Rousseff on Wednesday after a five-day trial and a lengthy overnight debate.

“Today is the day that 61 men, many of them charged and corrupt, threw 54 million Brazilian votes in the garbage,” Rousseff tweeted minutes after the decision.

In a separate vote senators decided not to ban Rousseff from seeking a public office for the next eight years.

Al Jazeera reported that Rousseff was watching the session from the presidential palace and would speak a couple of hours after the vote at a news conference.

She also said that the case was not expected to go any further as the charges were political, not criminal.

Allies of Rousseff have signalled that they would take the case to the Supreme Court. But several motions filed to the country’s highest court throughout the impeachment proceedings have failed.

Rousseff’s former vice-president turned rival Michel Temer, 75, was sworn in as president on Wednesday until the next scheduled election in late 2018.

Rousseff, from the leftist Workers’ Party, is accused of taking illegal state loans to patch budget holes in 2014, masking the country’s problems as it slid into its deepest recession in decades.

She told the Senate that she was innocent, saying the impeachment trial amounted to a right-wing coup d’etat.

Rousseff asserted that impeachment was the price she paid for refusing to quash a wide-ranging police investigation into the state oil company Petrobras, saying that corrupt politicians conspired to oust her to derail the investigation into billions in kickbacks at the oil giant.

She said it was “an irony of history” that she would be judged for crimes she did not commit, by people accused of serious crimes.

The Workers’ Party under Rousseff and her predecessor Luiz Inacio Lula da Silva is credited with raising around 29 million Brazilians out of poverty.

But many now blame the party and Rousseff in particular for the country’s multiple ills.

Previous 4 Reasons Why CEO of Facebook, Mark Zuckerberg is in Nigeria!
Next EFCC grills Ogunlewe over N250m FUNAAB funds scam