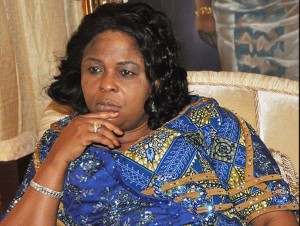 The Economic and Financial Crimes Commission has arrested four domestic servants, including a driver and a houseboy, whose names were used to open bank accounts for Mrs Dame Patience Jonathan, the wife of former President Goodluck Jonathan.

The directors listed for these accounts and whose photographs are used to open the accounts were arrested and they turned out to be drivers and house boys of these folks. But the signatory to the accounts is Madam Peace.
The house boys and drivers doesn’t even know that those accounts exist as they don’t have access to the accounts.

Sources within the anti-graft agency said on Sunday that the companies’ accounts were opened at Skye Bank.

The four companies’ accounts, which have since been frozen by the EFCC, have a balance of about $15m while another account, which bears Patience Jonathan’s name, has $5m.

Mr. Sammie Somiari, who deposed to an affidavit on behalf of the ex-President’s wife, said the former First Lady was the owner of the money in the accounts.

She had revealed that she gave millions of dollars to the then Special Adviser to the President on Domestic Affairs, Waripamowei Dudafa, to open accounts for her.

Somiari, however, claimed that Dudafa opened five accounts for Patience and that only one of the accounts was in her name, while the other four were opened in the names of companies belonging to Dudafa.

A detective at the EFCC, however, revealed that Dudafa used his domestic servants’ names to open the four other accounts and then deposited the money into the accounts.

The operative added, “We were investigating Dudafa when we stumbled on those four companies’ domiciliary accounts opened at Skye Bank with a balance of about $15m. On further investigation, we were able to identify the directors of the companies.

“When we detained the directors, we found out that they were Dudafa’s domestic servants. One of them was a houseboy while another one was a driver. Their photographs were used in opening the accounts and their signatures were forged.

“We found out that these domestic servants were completely innocent because they had no access to the accounts. We have since released them. The sole signatory to the accounts was Patience Jonathan and she was issued with a special card, which is accepted worldwide. She has a separate account, which was opened in her name and has a balance of $5m.”

The detective said a lawyer, Amajuoyi Briggs, who allegedly helped Dudafa to perpetrate the fraud, would also be arraigned.

It was learnt that two Skye Bank executives, Demola Bolodeoku and Dipo Oshodi, who helped Dudafa to open the accounts on March 22, 2010, were also being investigated.

The detective added, “This is a clear case of fraud and there is no way the bank officials will say they did not know what was going on. They are under investigation and those found culpable will be arraigned.”

The EFCC operative said he could not immediately confirm if the transaction was reported to the Nigeria Financial Intelligence Unit.

He explained that the commission had discovered a trend which politicians used in laundering and concealing funds, saying it was becoming more rampant due to the operation of the Bank Verification Number which links all accounts owned by an individual.

He added, “What we have noticed is that in order to conceal funds, what politicians and top civil servants do is to open bank accounts in the name of family or friends and then make themselves the sole signatory to the account.

“Don’t forget that we traced about 17 bank accounts to the immediate past Chief of Defence Staff, Air Chief Marshal Alex Badeh (retd.).

“Often times, they do this in connivance with bank officials and that is why the EFCC Chairman, Mr. Ibrahim Magu, has said henceforth, whenever we are investigating a bank official, we will probe the entire bank as well because these officials usually act under the instruction of their superiors.”

Jonathan’s wife has, however, sued Skye Bank for freezing her bank accounts and giving the EFCC vital information about her finances.

She also wants the court to order Skye Bank to pay her damages in the sum of N200m for what she termed a violation of her right to own personal properties under Section 44 of the 1999 Constitution.