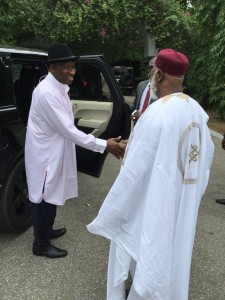 With his wife, Patience likely to be a guest of Economic and Financial Crimes Commission in the coming days, former President Goodluck Jonathan set tongues wagging with a visit to two former Nigeria’s military rulers, Generals Ibrahim Babangida and Abudusalam Abubakar on Tuesday in Minna, Niger State.

Jonathan was reported to have come to the state capital in company of Alhaji Bashir Yuguda and Mr. Mike Oghaidome, two prominent members of the Peoples Democratic Party (PDP).

The first port of call of Jonathan, according to THISDAY checks, was the residence of Babangida at the Hilltop in Minna at about 11a.m.

He was said to have met with the former military ruler for about 40 minutes ‘upstairs’ while those who accompanied him waited in one of the sitting rooms downstairs.

According to insiders in the residence, immediately the duo finished their meeting, Jonathan moved straight to the residence of Abdulsalami, a stone throw from that of Babangida.

It was learnt that Jonathan stayed longer at Abubakar’s residence because he left the place at about1p.m. and drove back to Abuja.

No one was privy to the discussions between the former Nigerian leaders but observers believed that they could have discussed the state of the nation as well as the ongoing probe of Patience, wife of Jonathan and former first lady by the Economic and Financial crimes Commission (EFCC).

It was also said that the crisis within the PDP and the Edo State governorship election could also have been discussed by the leaders.

It was the first time President Jonathan would visit Niger State after leaving office as democratically elected president in May 2015.

“As I visit my elder brothers and predecessors today, I am further committed to building bonds of unity for Nigeria!,” the ex President who tweeted the pictures of the visit said.

Jonathan’s wife, Patience has been under the spotlight in the past 48 hours over her attempt to claim the sum of $20 million deposit in four different accounts operated by a domestic aide of her husband when he was in office.

EFCC has frozen the account as it suspected the funds were proceeds of money laundering.

But the former First Lady has now dragged the anti graft agency to court, claiming that the funds belonged to her.

Reports also indicated that the anti graft agency many call in the former First Lady to explain the source of funding for a posh hotel estimated at over N10 billion she owned in Yenogoa, the capital of Bayelsa State.

The visit of Jonathan, especially to Abdusalam cannot but arouse curiosity against the background of the allegations against Patience, especially given speculations that the former military ruler has been the one stopping President Muhammadu Buhari from dragging the former President into his ongoing anti corruption probe.

Previous Question Of The Day-..Does Buhari need 10 aircraft?
Next 10 Reasons Why You Should Stop Looking For Job As A Graduate