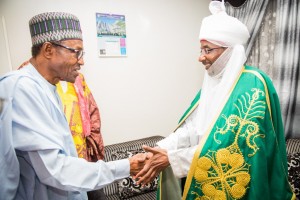 Muhammad Sanusi II, emir of Kano, has called on the government of President Muhammadu Buhari ‎to seek the advice of experts in tackling the current economic crisis.‎

He said ‎consulting experts would help in enunciating ‎appropriate solutions to the crisis, and reduce the hardship of the people.

The former governor of the Central Bank of Nigeria (CBN) urged wealthy Nigerians to support the less-privileged in order to alleviate their sufferings.‎

‎‎He asked Nigerians, irrespective of religious beliefs and political inclinations, to continue praying for economic growth and development of the country.‎

He also urged the people of Kano to remain law-abiding and be their brother’s keeper, irrespective of their religious or ethnic background.‎

Sanusi appealed to the state government to help the people acquire skills‎ that would make them self-reliant.‎

In his remarks, Hafiz Abubakar, acting governor of the state, said paying salary of workers was not a privilege but an ‎obligation, which the state had continued to meet.

He pointed out that the economic crunch had made it difficult for at least 28 states in the country to pay workers’ salary.‎