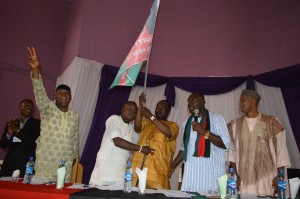 The Ondo State political turf got a booster yesterday as a legal luminary and notable son of the soil , Barrister Bola Aidi formally secured the endorsement of the Unity Party of Nigeria, UPN to contest as its governorship aspirant in the forthcoming election holding on November 26.
Bola Aidi was given a unanimous Yes vote by the party’s delegates on Saturday during a primary which coincided with the State Congress held at the AT &T Hotel in Akure, the Ondo State capital.
The party executives and members burst into wild jubilation as the Party National Vice Chairman, South South, Prince Abbi who served a dual role as Chairman of the Ondo State Congress cum Governorship Primary Election Committee handed Aidi the Party flag which symbolized that he is the UPN Candidate for the November 26th 2016 Governorship poll.
The UPN Primary was witnessed by the national officers of the party, the representative of the Independent National Electoral Commission [INEC] and Engineer Patrick Akinsule, the South West Chairman of the Conference of Nigerian Political Parties[CNPP].
Among the UPN national officers that were present during the primary were Alhaji Sani Zayyanu National Vice Chairman North East, Chief Onileola, Chairman UPN Ekiti State and member of the Congress and Primary Convention, and Asiwaju Onasanya, the National Assistant Financial Secretary.
In his acceptance speech, the UPN flag bearer thanked the party delegates for believing in his capabilities to deliver as he promised never to let them down.
Aidi said his emergence is symbolic in the sense that it is the beginning of the liberation struggle that many good things will start happening in Ondo State.
He also said that his emergence is the end to all forms of political slavery, stagnation in terms of delivery of genuine dividends of democracy and servitude foisted on the people of Ondo State by the incessant political encroachments by successive administrations.
“ Let me seize this opportunity to declare before you all that my nomination today marks the beginning of the rebirth of the golden era in our Sunshine state, enough of poverty, enough of political vagabonds in power. UPN will return Ondo State to her place of glory as our people will by the Grace of God experience excellent governance,” he pointed out.
“We will not shortchange our people, everybody will benefit equally in the sharing of the democratic dividends and we will not waste the common wealth of our state, but we will judiciously manage the meagre resources to develop our state,” he assured.
‘