Like Ambode,Bayelsa Gov Gets Babies After 15yrs Childless Marriage 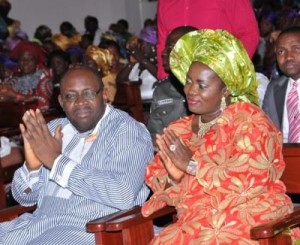 Dr. Rachael Dickson, wife of the Bayelsa State Governor, Seriake Dickson, has been delivered of a set of quadruplets in the United States of America.For Lagos state governor,Ambode and his wife Bolanle,the waiting was longer..he waited 17 years before twins came via IVF.

the couple waited patiently on the Lord for 17 years to bless their marriage with a child.
About three years ago, it was said that they found a way of dealing with the problem when they had a set of twins, a boy and a girl through In Vitro Fertilization(IVF) in the United States.
IVF is the process by which eggs are removed from woman’s body ovaries and mixed with sperm in a laboratory culture dish. Fertilisation takes place in this dish, “in vitro”, which means “in glass”.
It is likely to be recommended when a woman has blocked or damaged fallopian tubes, or her partner has a minor problem with his sperm, and success was not achieved through fertility drugs.

After waiting for 15 years,Dicson and Rachael , decided to go for IVF…Now they are very happy because God allowed the IVF to work. Some people have done the same procedure more than four times yet it did not work. One still needs to pray for the procedure to work.

A statement on Friday by Dickson’s Chief Press Secretary, Daniel Iworiso-Markson, indicated that the babies were a boy and three girls.

The babies came after many years of childlessness for the governor’s wife.

The 43-year-old mother, a graduate of the University of Nigeria, Nsukka, is doing well with the infants, according to the statement.

The statement said, “The season of celebrations continues in the family of Governor Henry Seriake Dickson of Bayelsa State as his wife, the First Lady, Dr. Rachael Dickson, was delivered of a set of quadruplets: a bouncing baby boy and three beautiful baby girls. She gave birth in the United States. Mother and children are doing well.

“This is particularly good news for the family and Bayelsans because this bundle of joy is coming after many years of praying and waiting upon the Lord.”

Governor Dickson was quoted in the statement as thanking friends, family members and the good people of the state for their prayers and support.

Previous Dangote Calls For Sales Of Assets..,FG,Govs Agree
Next REVEALED! Forces Behind Cracks In APC,.as Tinubu Says Oyegun Must Go