Tinubu Denies Saying Buhari Begged Him To Be President 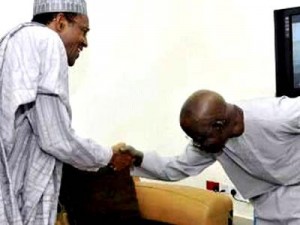 A National Leader of the All Progressives Congress, Asiwaju Bola Ahmed Tinubu, has denied a media report that he “bombed” President Muhammadu Buhari.
Some posts had on between Monday and Tuesday quoted Tinubu as having taken on Buhari following his face-off with the National Chairman of the APC, Chief John Odigie-Oyegun.
He was quoted to have made snide remarks about the President, including the fact that Buhari begged him to emerge president.
But in a statement by the Tinubu Media Office, the former Governor of Lagos State was distanced from the story.
The statement said: “In the past 48 hours, we have noticed the churning out of falacious and outright malicious stories in the social media concerning Asiwaju Bola Tinubu.
“We want to state that the stories are patently false and we urge unsuspecting Nigerians to ignore the lies being spread and the wicked stories about what Tinubu purportedly said or did. The stories being churned out are being done by some fifth columnists who seek to drive a wedge between these leaders. One of such stories is the one entitled ‘Tinubu Bombs Buhari,’ which is fit only for the trash can and a figment of the writer’s imagination.
“Asiwaju Tinubu remains a staunch APC stalwart and supporter of the APC government under the leadership of President Muhammadu Buhari. Tinubu is preoccupied with assisting to find solutions to the present challenges now confronting us as a nation and nothing will distract him from doing this.”
Tinubu, according to the earlier story, allegedly spoke when he received a segment of APC chieftains from the South West who paid him a solidarity visit late on Monday.
He was quoted to have said: “I regret building APC and giving Buhari a platform to become president.
“We all knew he didn’t merit to be president, but you know how we politicians behave when we are desperate for electoral position; We beg.
“That was how President Buhari always and frequently came to my private house here in Ikoyi with his entourage which included that Nasiru and others.
“At a point, he was practically living in my house, under my roof. The room he was sleeping was just 6-7 steps from my own private room. I was building his confidence because he didn’t have it. He was even scared of Atiku and Rabiu.
“What I ate, he ate. My security was his security because he expressed fears about the security provided by the Jonathan government. He was afraid of Jonathan.
“Now they occupy Aso Rock and they think Asiwaju Tinubu is finished. He is using people I brought from obscurity against me. Now they say my mouth is smelling. They say I’m no longer relevant. The battle line is drawn, I will show them the meaning of Asiwaju.
“I know they have surrounded my house. They are there outside. You can’t see them but I know where they are. I see them, but I am not afraid of them. They know that.”
When asked “what next” by one of the loyalists, who said: “What do we do now?” Tinubu was quoted to have replied: “Don’t worry, just watch. Time will tell, I built this party and I can destroy it, but for now I vow, PDP must win Ondo State.”

Tags I did not ‘bomb’ Buhari – Tinubu slideshow