Akeredolu boast: Tinubu is now with me, It’s easy to defeat Jimoh Ibrahim 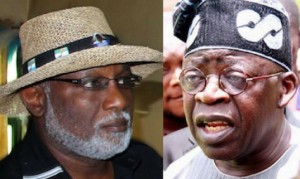 The All Progressives Congress (APC) candidate in the forthcoming Ondo State governorship election, Rotimi Akeredolu was on Monday confident that he can win the two Peoples Democratic Party (PDP) aspirants, Jimoh Ibrahim and Eyitayo Jegede, put together.

He spoke with State House correspondents after he met with President Muhammadu Buhari along with Plateau State Governor, Simon Lalong at the Presidential Villa, Abuja.

Akeredolu said: “l can always tell you, people who know me, they know that I talk most times with some confidence, let me assure you here that by the grace of God, we will win the election in Ondo state.

“I can assure you I would have been happier facing both of them together, if Eyitayo Jegede was chosen as candidate and Ibrahim as his deputy, I will still win.

“Infact Jegede happens to be a friend, Ibrahim too. Jimoh Ibrahim went to Ife, so we have known ourselves for long. I have no fear about both of them. We know that we are going to win this election and I have no doubt,” he added

When asked to speak on efforts to settle the rift between him and the National Leader of the APC, Asiwaju Bola Tinubu, he denied any rift with Tinubu.

He said that his party in the state has already called on the security agencies in Ondo to be up and doing in order not to allow miscreants take over the state in the name of protests.

He said: “Because for instance as a governor you encourage lawlessness or people in the guise of protest because what the PDP has is a problem within the party, that should not lead to demonstration outside and you know that people are not demonstrating for any reason but because they have been more or less paid to come and do it.

“What we said is don’t allow miscreants to be out. Nobody can control the end of such demonstration. So it’s not that we are afraid, but we fear for the life and property of the people of Ondo state.” He stated

Speaking on the visit to the President, Lalong said: “A few weeks ago I was given the responsibility of leading the campaign on behalf of the National Executive for the Ondo election. And the candidate since election at the primaries have not come to be presented to the leader of our party, that is Mr President.

“So today we came in with the candidate and to confirm to the President that APC has only one candidate unlike other parties that are fighting about who is their candidate.

“We have only one candidate and that candidate is Chief Akeredolu Rotimi (SAN).” He said
He was optimistic that the APC will win the election.

“Today again we are going into Ondo, all the mistake we made in other states we have corrected them, we are seeing a very smooth election, not only a smooth election but the credibility of the candidate itself is something worth selling,” he said.

According to him, Mimiko should have concentrated on resolving the crisis that erupted in his state.

He said: “Let me say it was even wrong for them to start running to Mr. President to help them solve the problem of PDP in their party. Mr. President is the President of Nigeria and he is not a member of PDP. Even when we have problems in APC, we don’t run to Mr. President.

“If he has a problem in his state, he is the governor, let him stay there and resolve the matter. Its a matter between PDP and PDP and those matters are in court. So why should you run to the President. Is the President the chief judge of Nigeria?” He queried

He went on: “He is not the INEC chairman either. Well Mr. President is a loyal party man. So he is answerable to the party although the president of Nigeria.”

On the response of President Buhari to the visit, Lalong said: “He has also confirmed that he has seen the candidate and is also praying for a successful election in Ondo state.”