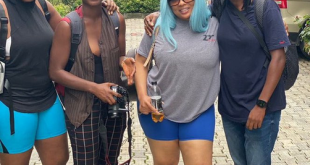 Reactions, as Lesbian Couples Flaunt themselves in Lagos

PDP has turned down requests for automatic presidential ticket for some bigwigs in APC wishing to switch parties.

Kwankwaso and Tambuwal are said to be testing the waters before making their next moves.

But the APC is not relenting in persuading some of its stalwarts, including Senate President Bukola Saraki, House of Representatives Speaker, Yakubu Dogara, Sen. Aliyu Wammako, Sen. Danjuma Goje and Sen. Ahmed Sani Yerima, to remain within the fold.

Sources said Saraki and Dogara appeared to be in a tight corner because they feel the APC have not been fair to them.

The two leaders are said to be “patching” their stay in APC until what a source described as a “critical political stage” in a few months’ time.

It was gathered that some presidential aspirants from APC had given the PDP some conditions for them to defect, the most critical being “ceding the PDP presidential ticket” to them.

The high level party source, familiar with the development, said: “About five APC stalwarts have approached PDP for talks but their request centered on giving automatic presidential ticket to them.

“But the party leadership has said that while it is ready to welcome these leaders and new members to PDP, it cannot concede automatic ticket to any.

“I think the PDP National Chairman, Prince Uche Secondus and his National Working Committee members are being fair. There is only a ticket available; it will be difficult to promise five leaders the same ticket.

“The PDP may adopt the same method used by the APC in 2014 by allowing all the aspirants to go for primaries and whoever wins the majority of votes will be the presidential candidate of the party.

“This is the only safe and fair option available to us as a party now. We want to leave the race open for all to avoid any fresh crisis in PDP.”

The source said the PDP, at its last National Convention, foresaw the likely defection of some APC leaders and presidential aspirants.

“This was why we amended the constitution of the party which allows new members to come in within three months and aspire for any political office,” he said. “This concession is substantial.

“Some APC governors are in talks with PDP and we are also deliberately wooing some strategic leaders. At the appropriate time when we have reached appreciable agreement, we will let Nigerians know.”

Two out of the PDP aspirants may have suffered a little jolt but they still have enough time to recover.

These are ex-VP Atiku Abubakar and Sen. Makarfi.

A former governor said: “We warned Makarfi against dancing to the tunes of governors to allow the South-South to produce the National Chairman of PDP. But he did so because the governors had an unwritten agreement with him to give him the presidential ticket.

“Now, it is apparent that the governors have really betrayed him. They are no longer keen on him. He is battling to consolidate his structure.

“As for Atiku, the exit of ex-President Jacob Zuma will affect the international dimension to his candidature. Having been very close, Zuma had been in the vanguard of selling Atiku’s candidacy to world leaders.

“The home front is also shaky for Atiku with the shift of loyalty to Buhari by Governor Jibrilla Bindow and the continuous defection of PDP leaders and members to APC in Adamawa State. The appointment of the Secretary to the Government of the Federation, Mr. Boss Mustapha, has shrunk Atiku’s base.

“It is not surprising that the President will be visiting Adamawa this week as part of his pulse-feeling shuttles to some states under the guise of commissioning of projects.

“The increasing interest of the First Lady in the politics in Adamawa State might further deplete Atiku’s camp.”

But it was obvious last night that the PDP governors might still play a crucial role in determining who will get the presidential ticket.

“These governors had their way with delegates at the last convention and the game may not be different during the presidential primaries,” another PDP leader said.

The Chief of Air Staff, Air Marshal Sadique Abubakar, has married the Minister of Humanitarian ...