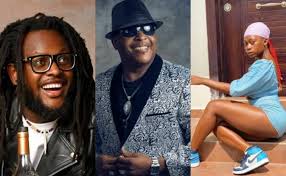 Clarance Peters, in whose house, Kodak was charging phone, before electrocution and his production crew members have been released by the Lagos Police Command to his Father, Afrojuju Maestro, Sir Shina Peters.

Clarence was released after medical reports showed that late video vixen Kodak died as a result of electric shock while charging her phone.

Clarence and his crew members have been guest of the police command panti, Lagos mainland since last week.

Picture Kodak died on Wednesday, April 29, 2020 while charging her phone. She is believed to have been electrocuted.

Since his arrest his father, the Afro juju icon was a regular face at the Panti Police station.

Previous Mr. Abba, newly appointed PTF Chairman was sacked by Jonathan..see why
Next NNPC reduces ex-depot price of petrol to N108 per litre