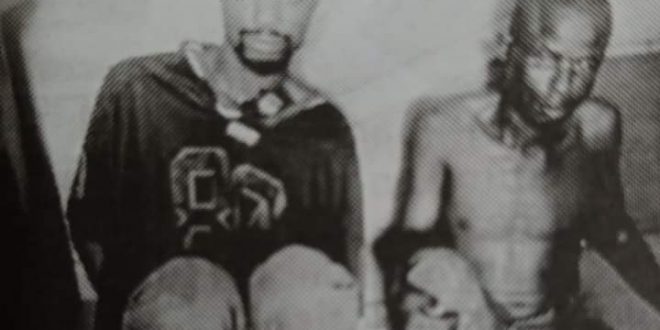 Two Friends confess to murdered of Business woman because of N400,000

Gbenga Ogungbemi and Tosin Olobamoyo have confessed to the fact that, both conspired and murdered a business woman Evelyn Ebere and disposessed her of N400,000.

She was trapped by somebody she knew and trusted …Gbenga a driver was well known to the woman who sold palm oil in the Sagamu area of Ogun State.

He regularly took her on hire basis to her business points where she transacted her palm oil business running into thousands of naira.
After running out of stock she contacted Gbenga for another trip to Ire-Ekiti on March 10,2020. Apparently she told Gbenga that she wanted to buy 26 kegs of Palm oil valued at N400.000. The love of money is certainly the root of evil. Gbenga was excited for a different reason. He saw an opportunity to make ‘cool’ cash by all means possible and asked his friend Tosin to join in the evil expedition.
Ebere was upbeat about the trip unaware of the evil plot and the looming tragic fate awaiting her in the hand of a trusted Ally and his co- conspirator. So on that fateful morning the trio set out for the ill-fated trip.
Gbenga Narrated the evil they did on the road
” Halfway into the journey, we decided to rob the woman of the money she wanted to use in purchasing the palm oil. I drove her into the bush along Sagamu- Benin expressway and we collected the N400,000 from her . We killed her because she knew us very well being my regular customer. After killing her we dumped her corpse in the bush”.
The Police according to Ogun PPRO , DSP Abimbola Oyeyemi, arrested the driver in the course of investigation after the family of the woman reported her disappearance .

He later confessed their evil act and his accomplice was arrested . They took the police to the crime scene and the body of the woman was recovered . The Ogun State Anti-Kidnapping Unit led by CSP Oluwatosin Shobiyi cracked the case within a few days after the dastadly and heinous act. They will be arraigned in court in due course to answer for their ignoble act .