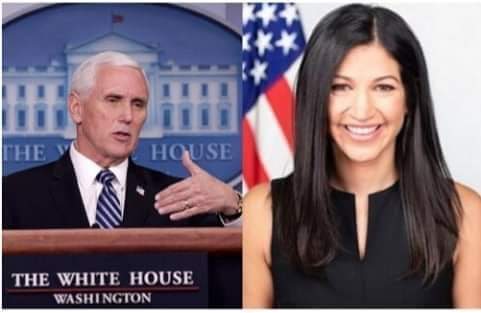 Trump risks CoronaVirus infection, says he is not worried.

Trump said he wasn’t worried about the risk of infection despite the virus moving closer to the President’s Office.
‘I’m not worried,’ he said. ‘We’re taking very strong precautions of the White House.’

Mainwhile, Vice President Mike Pence’s spokesperson Katie Miller, who also serves as a spokesperson for the White House Coronavirus Task Force, has tested positive for the disease.
Trump confirmed Miller was the staffer who tested positive on Friday during an event with Republican lawmakers at the White House.
‘She’s wonderful young woman,’ Trump said.
‘Katie tested very good for a long period of time and then – all of a sudden – today she tested positive.
She hasn’t come into contact with me but spent some time with the vice president.’
And this has put Mike Pence at risk of contacting the disease.
He was tested on Friday and the result came back negative.
Miller is married to Stephen Miller, an adviser to President Trump who works in the West Wing near the Oval Office.
Following Miller’s diagnosis, Trump, the vice president, and most White House staff including Miller’s husband Stephen are now getting tested on a daily basis.
This comes a day after a valet to President Trump tested positive for Coronavirus.

White House Chief of Staff Mark Meadows called the White House the ‘safest place that you can come to.’
He said additional safety protocols have been put place over the last 48 hours but declined to detail them.
‘I don’t want to get into all the procedures that we’ve embarked on but I can tell you that this – it’s probably the safest place that you can come to,’ he said.
Staff are checked daily, give symptom histories and all work spaces get regular, deep cleanings, according to deputy White House press secretary Judd Deere.
‘The President’s physician and White House Operations continue to work closely to ensure every precaution is taken to keep the President, First Family and the entire White House Complex safe and healthy at all

Previous If Wike’s demolision ends in Court..Legal status and application of Executive Orders:
Next Madagascar’s COVID-19 cure drugs sent to Nigeria by air, expected in Abuja