Home » Events » Where Wike got it wrong, come what may 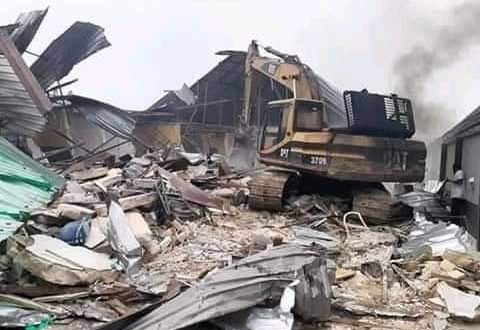 Where Wike got it wrong, come what may

Governor Ezenwo Nyesom Wike of Rivers State went to Eleme Local Government Area to demolish two Hotels on the unsubstantiated claim that the Hoteliers violated his Executive Order (Regulation) on lockdown. The Regulation was made pursuant to QUARANTINE ACT, 1926, Laws of the Federal Republic of Nigeria. The said Act expressly provides for punishment. Section 5 states thus: “Any person contravening any of the regulations made under this Act shall be liable to a fine of N200 or imprisonment for a term of six months or to both.” From where did the power of demolition emanate? Can Governor Wike by a mere Regulation, which is also inconsistent with the Regulations made by the President, override the express provision of an Act of the the National Assembly of Nigeria? What an affront?

The above is the maximum punishment prescribed by the same Act that the Governor relied upon to make his so called Regulations. The Governor constituted himself into the Prosecutor, the Judge and the Executor of the judgement. Yet, he says he is a lawyer, a Live Bencher, he has Attorney General of the State, he has very Senior Members of the Law Community as advisers. Unfortunately, this is what you get when a Governor has his friends, the spouses and children of his associates in charge of the judiciary in the State. He is very certain that nobody can get justice against him from any Court in Rivers State; no Judge dares give any judgement against him.

I must say that I have known Nyesom Wike for nearly thirty (30) years and I know his antecedents. As I said before, the Governor is bereft of any strategy or action plan on managing the pandemic in Rivers State, hence he is deliberately provoking the residents so they would react to his excesses. Once there is any slightest reaction, he would use that as subterfuge and excuse for his ineptitude and failure. Rivers State must be vigilant.

The Inspector General of Police must realize that he has a role to play in averting the foreseeable civil disobedience in the State. The IGP must rise to the occasion, by calling his men to Order. They must refrain from accompanying the Governor to execute such rape on the Constitution of the Federal Republic of Nigeria and the Rule of Law. The Governor by his conduct is threatening the peace of the State and by implication, National Security and the Police are providing him backup. The IGP must hold any police officer who aids such blatant violation of the Constitution of Federal Republic of Nigeria accountable, that way the Governor would be put in check.

Tags come what may slideshow Where Wike got it wrong

Previous Gbenga Daniel’s media aide is dead !
Next Falana pinpoints where Wike is wrong, urges NBA to punish him