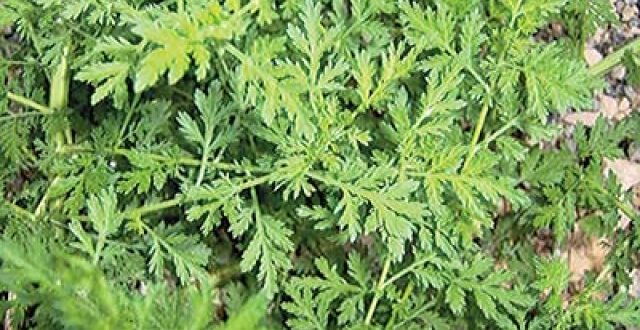 The Nigerian Medicinal Plant Company, formerly known as Artemisinin Development Company, was set up by a presidential committee during former President Olusegun Obasanjo’s administration with the mandate to look into local cultivation, processing and production of anti-malaria medicines, based on the Artemisinin-based Combination Therapy (ACT) endorsed by the World Health Organisation (WHO).

The WHO has shown that Artemisinin is less resistant to malaria unlike old chloroquine. It therefore wants all countries with proven malaria resistance to switch to Artemisinin-based ACT. But the drug is imported with understandable huge financial implications for cash-strapped countries such as Nigeria.

Nigeria has since been researching into how to produce Artemisia annua, the plant-based drug.

The presidential Committee has been in the race to domesticate this vital pharmaceutical raw material.

Studies show Artemisia annua kills 98% of malignant lung cells in 16 hours
However, a cheap daily pill that has revolutionised the treatment of malaria – and is based on a Chinese herbal remedy – could be the latest weapon against bowel cancer.

Artemisia annua L. (A. annua), commonly called annual wormwood, and belonging to the family Asteraceae, is a medicinal plant native to temperate Asia but has presently naturalized throughout the world. It has been recently introduced for commercial cultivation in Nigeria. The plant has been scientifically revealed to contain a rich portfolio of bioactive compounds including polyphenols and exhibits a wide range of pharmacological properties including antimalarial, antimicrobial, anti-parasitic, and antiviral activities.

Artemisinin, one of the most important of the several compounds produced by the plant, is highly potent and efficacious against multidrug resistant strains of malarial parasites and has also displayed unique pharmacological activities against a wide range of parasitic organisms, a number of viruses and tumour. Quite recently, Artemisia annua tea infusion has been scientifically proven to show a remarkable anti-Human Immuno-deficiency Virus (HIV) activity in vitro.

Early trials published in the Journal of Life Science show that bowel-cancer patients who took the drug for two weeks before surgery were six times less likely to have a recurrence of the disease compared to those who took a placebo.

In addition, patients taking the drug did not suffer any side effects, giving hope that the pill could provide a safe, affordable treatment.

According to a report published by DailyMail UK online, the treatment is now being rolled out in a larger United Kingdom (U.K.) trial involving 140 patients.

Researchers will look at whether the drug can halt the multiplication of tumour cells to stop cancer spreading or recurring after surgery.

“It could change the way bowel cancer is treated,” says Professor Sanjeev Krishna, of St George’s London University, who led the earlier trial. “We know it is safe, from work with malaria, and cheap – less than £1 a pill. It could be in general use very quickly.“It has such potential that I call it the new aspirin.”

Artesunate is derived from the leaves of sweet wormwood, an aromatic herb used to treat fever for more than 2,000 years. Chinese scientist Tu Youyou was awarded the 2015 Nobel Prize in Medicine for her discovery that the herb could be used to treat malaria.

Early trials saw 23 patients due for bowel-cancer surgery given daily doses of artesunate, or a placebo for two weeks prior to their operation.

Only one patient taking artesunate had a recurrence of cancer after three-and- a-half years, compared to six in the placebo group.

According to a series of studies published in Life Science, artemisinin, a “Sweet wormwood” or Artemisia annua derivative, was used in Chinese medicine and it can kill 98 per cent of lung cancer cells in less than 16 hours.

The herb used by it reduces lung cancer cells up to 28 per cent, but in combination with iron, Artemisia annua successfully and completely “erases” cancer, and in the experiment this herb had no impact on healthy lung cells.

Artemisinin in past was used as a powerful antimalarial remedy, but now it is proven that this cure is also effective in the fight against cancer.

When scientists added iron while conducting the study, which later attached to lung tissue, especially to cancer-infected cells, artemisinine selectively attacked “bad” cells, and left “good” cells untouched.
“In general, our results show that artemisinin stops ‘E2F1′ transcription factor and intervenes in destruction of lung cancer cells, meaning it presents a transcription way according to which artemisinin controls reproductive cancer cell growth,” was stated in the conclusion of the researches conducted in the cancer laboratory at the University of California.

The Journal of Life Science reported on a study out of the University of Washington, conducted by Drs. Narenda Singh and Henry Lai. So far, this is the most extensive study done in the US on artemisinin.

The study was conducted in a laboratory in tissue samples (in vitro) as opposed to a study on animals or humans (in vivo). Using a radiation resistant variety of breast cancer cells (that also had a high propensity for accumulating iron) artemisinin proved itself to have a 75 per cent cancer kill rate after just eight hours, and almost a 100 per cent kill rate in just 24 hours.

There are numerous experiments conducted so far and they all prove that in combination with iron, artemisinin can effectively destroy cancer, and this extract was used in China for thousands of years, as a cure for malaria.

Malaria parasite cannot survive in the presence of artemisinine, because it is rich in iron, and bio-engineers Henry Lai and Narendra Singh from the University of Washington were the first scientists to discover this. The original peer reviewed journal article concluded: “Artemisinin and artemisinin-tagged iron-carrying compounds could be developed into powerful anticancer drugs.”

A Nigeria study published in Asian Pacific Journal of Tropical Biomedicine concluded: “The results indicate that Artemisia annua leaf extracts have potent antioxidant activities that would have beneficial effect on human health, and aqueous organic solvents are superior to the absolute counterparts in yielding extracts with better antioxidant potential.”

Artemisia annua tissues (such as the leaves, inflorescence, and stems) have shown great promise as good reservoirs of nutrients and antioxidants, with very minimal anti-nutritive factors which might favour their use as potential herbal tonic by humans or an important supplementary feed additive for livestock production systems. This finding, coupled with the remarkably high amounts of phenols and flavonoids contained in the plant, is a significant pointer to its potential antioxidant activity. This is due to the chemical nature of these phytochemicals (phenols and flavonoids), which makes them strong reducing agents.