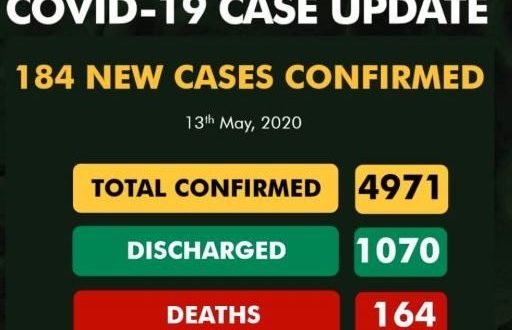 Nigeria has recorded 184 new cases of the Coronavirus across various states of the country.

Announcing via its official Twitter handle on Wednesday night, the Nigeria Centre for Disease Control (NCDC) stated that 51 new cases were recorded in Lagos, 16 each in Bauchi and Katsina States, 23 in Jigawa State, 14 in Kano State, ten in the Federal Capital Territory and Rivers State, nine in Kwara State and five each in Delta and Kaduna State.

The tweet further revealed that four cases each were recorded in Sokoto and Oyo State, five three in Kebbi, Nasarawa and Osun State, two in Ondo State and one in  ebonyi, Edo, Enugu, Anambra, Plateau and Niger State

As at now, 4971 persons have tested positive for COVID-19 in Nigeria with 1070 patients discharged and 164 deaths recorded.