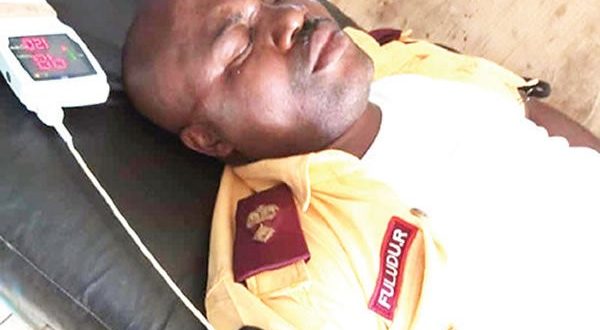 Policemen beat LASTMA officer to a pulp over bribe

Some policemen beat a senior officer of the Lagos State Traffic Management Authority, Roland Fuludu, to a pulp.
‘
It was gathered that the traffic officer was beaten by policemen led by one SP Femi Iwasokun for allegedly interfering with their job.

Our correspondent gathered that the policemen opened a section of the road that was under construction for motorists, who parted with bribes.

Trouble started when Fuludu accosted one of the policemen for turning back a vehicle that passed through the normal route and the encounter degenerated into an argument.

It was gathered that when Iwasokun later came to the scene, another argument ensued between him and the LASTMA officer.

Fuludu said Iwasokun slapped him on the face, while one of the other policemen hit him on the head with a stick, which made him fall and lose consciousness.

He stated, “Around 9am on Monday, six policemen came and said they were asked to start turning vehicles back and nobody was against them doing their job. When they wanted to open the road that was under construction for motorists, they said we should reach a compromise and be collecting money from the motorists, but I declined and left them.

“When they turned a vehicle that passed through the normal route back, I went to ask one of them why they would do that, but he just said he was going to hit my head with a stick; we had an argument and I called his boss, Supol Femi, to report the cop, but he too was cursing me on the phone and I dropped the call.

“Five hours later, when I was coming back from where I went to eat, I saw Supol Femi and I went to greet him, only for him to ask me why I was talking to him on the phone like that and asked if we were mates. When I told him that he did not know my age, he slapped me and his colleagues manhandled me and I fell from the pavement, where I stood, and hit my head on the floor and lost consciousness.”

An eyewitness, who spoke on condition of anonymity, stated that the policemen seized the phone of one of the LASTMA officers, who was recording the incident.

He said, “The policemen held on to the other LASTMA officers, who was recording the incident, and seized his phone, because they knew that what they did by beating an officer in uniform was wrong. SP Femi is fond of aiding lawlessness among truck drivers, which makes the LASTMA job difficult.

“Police officers and other law enforcement agents on the road are to work together without confrontation and if there is any, they should find a common ground to resolve it amicably and not disgracing and humiliating each other.”

Previous Gambari do breakfast with Buhari, why & how he was chosen from 14..see list
Next Doyin Okupe  & wife appreciate sources of inspiration as Covid positive patients