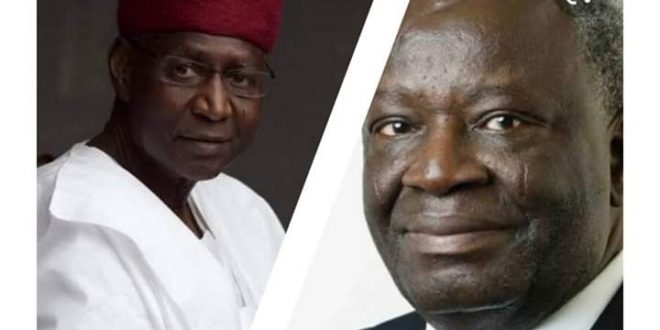 Asiwaju Ahmed Tinubu and Mallam Mamman Daura were the only people privy to the emergence of the new Chief of staff.

The power play that produced Ibrahim Gambari as the new chief of staff to President Buhari after the demise of Mallam Abba Kyari, who died on 17th April, at the age of 67 from complications caused by the Coronavirus started like a baby conceived by a pregnant woman waiting to be delivered.

Hardly had he been lowered to his grave when his political contemporaries started scheming for his position.

Many names were brandished in the media on the likely successor to the Late chief of staff to President Muhammadu Buhari, who was a versatile lawyer, successful banker, accomplished journalist and brilliant administrator.

Unknown to many Nigerians, many of the aforementioned names actually lobbied for the position.

The lobbying became intense when the Federal Executive Council, made up of mostly cabinet ministers, were angling for one amongst them to emerge as the next chief of staff to President Buhari.

Investigations revealed that the ministers based their argument on the need to achieve “better synergy”.

The ministers were of the opinion that a chief of staff to the president from their fold will be “able to fast-track decision making on issues”.

The report quoted a top source as saying, “… their argument is that it will enhance synergy between the president and his cabinet since the ministers now report to the chief of staff…”

Findings from this report suggests that the ministers were not altogether satisfied with the way things went under the late chief of staff.

This further raises scepticism over the performance of the late Abba Kyari on whom many Nigerians have written several testimonials – both good and bad – since his death a fortnight ago.

Surprisingly, President Buhari did not give room for discussion of such at the time as he was mourning his best friend and confidant whom he described as “the very best of us”.

On Friday last week, according to our investigation, a call came in from a powerful member of President Buhari’s confidants about a rumour making rounds in the city of Abuja that a sharp practice was going on in the villa amongst the top aides of the president and a big vacuum had been left behind by the demise of Abba Kyari.

The caller reportedly happened to be the head of the people labelled by the first lady, Hajia Aisha Buhari as “Cabal who hijacked her husband’s government.”

An impeccable source said that the caller booked an appointment to see President Buhari in order to brief him about the latest development.

As soon as the meeting between him and the President started, he went straight to the point by telling Mr President that it was urgent for him to appoint a new Chief of staff.

President Buhari was quoted as telling his visitor that he was aware of everything going on around his government and he has concluded to hire a new successor to replace his late chief of staff, but will like to consult one of his friends, the National leader of his party, His Excellency, Asiwaju Bola Ahmed Tinubu.

According to our source, the choice of Professor Ibrahim Agboola Gambari was suggested to Mr President by the duo: Asiwaju Bola Ahmed Tinubu and Mallam Mamam Daura.

None of President Buhari’s aides was privy to this discussion except one who is commonly regarded as Mr Secret keeper in the Villa, for his ability in keeping secrets of whatever information passes through his table.

On Tuesday morning, a message was sent to Professor Ibrahim Agboola Gambari to see Asiwaju Bola Ahmed in Lagos where he was briefed on his new role and was told to report in Abuja by 2pm on Tuesday.

A visibly shaken Professor Gambari was lost for words for a few minutes, but later gathered himself together and promised to serve Mr President from the wealth of his experience.