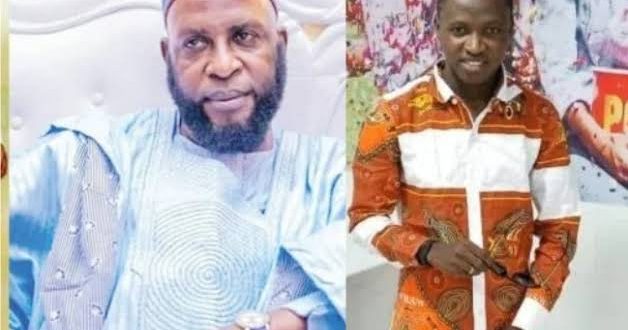 Akewugbagold noted that he had plans to fund the young man’s marriage, send him to hajj before the wicked betrayal of trust.

One of his casual workers identified as Opeyemi Ibrahim Agbenuso, organized and masterminded the abduction of his children.

Akewugbagold disclosed that Agbenuso had been playing the role of a social media manager for him during the period of Ramadan.

The betrayed cleric noted that the young man had wormed his way into his heart so much and they still enjoyed an iftar meal together about three days ago.

“Alhamdulillah ! Allah has bear me witness that I worship Him only. This is Opeyemi ibraheem Agbenuso odo a casual worker under me who is handling social media aspects of my Ramadan lecture. He was the betrayal who organised and masterminded the kidnapping. He so much warmed himself into my heart that till 3days ago we do break fast together on the same plate,”

Explaining further, Akweugbagold said that he was so taken by the young man’s intelligence that he had included him among his planned hajj beneficiaries and also made a commitment to fund his wedding ceremony.

On a final note, the cleric who wondered if it is a crime to render help disclosed that Agbenuso was to earn N100k for his social media job and was also entitled to 25 percent of gifts gotten daily from Ramadan lectures.

The suspects were paraded by the Oyo state Police Commissioner, CP, Shina Olukolu at the police headquarters, Eleyele Ibadan.

Also, part of the N4m ransom collected by the kidnappers to free the twins as well as the vehicles used for the operation recovered from the suspects were also paraded before journalists.

Modinat, the only female member of gang was said to have been saddled with the responsibility of taking care of the twins while they were in captivity of the kidnappers.

While parading the suspects before journalists, Olukoku said, ”I wish to inform you that in the sensational case of the kidnapping of the 2-year old twins of Alhaji Taofeek Azeez “Akewugbagold” on the 25″ April, 2020. All the suspects have been arrested with substantial parts of the ransom collected, the gun used for the operation, the two operational vehicles, and one motorcycle were also recovered from them.”

”The notorious criminals attacked his wife and subsequently abducted his 2-year old twin to an unknown destination. The criminal assailants later demanded for ransom of Fifty Million Naira (N50, 000, 000.00) before the two abducted babies would be released.”

“As soon as the incident was reported at Ojoo Police Station and later transferred to AK Eleyele/SARS office Dugbe, Ibadan, a team of AKS/SARS operatives swung into action while concerted efforts was intensified to rescue the abducted babies and arrest the perpetrators of the heinous crime.

The abducted babies were released unhurt eight ‘8’ days later after their father had parted with an alleged sum of four million naira only (N4,000,000) as ransom to the hoodlums.”

The kidnapping syndicate paraded by the police includes: Rildwan Taiwo,(30) Rafiu Mutiu(35), Olumide Ajala,(36) Fatai Akanji,(39) Bashiru Muhammed (25,Opeyemi Oyeleye (33)and Rafiu Modinat (29), a female member of gang who was detailed to take care of the babies while in captivity were all arrested in their respective hideouts in connection with the crime