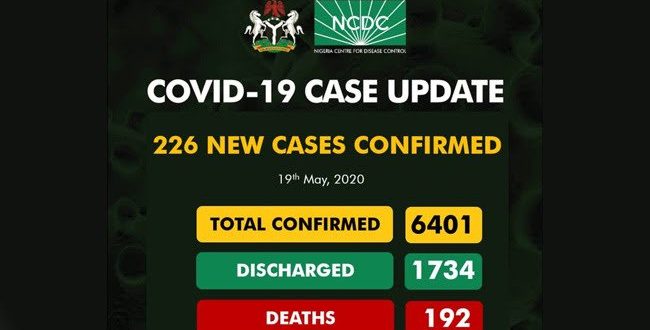 Nigeria has recorded 226 new cases of the COVID-19, bringing the country’s total number of infections to 6,401.

The Nigeria Center for Disease Control (NCDC) announced this late on Tuesday.

Other states that have recorded new cases include Edo with 11 cases, Kaduna with seven, Oyo with six, the FCT and Adamawa with five each, Jigawa, Ebonyi and Borno with four each, Nasarawa with three cases, Bauchi and Gombe with two each and one each in Enugu and Bayelsa states.

A total of 1,734 persons have, however, recovered from the virus while the death toll now stands at 192.

Previous 22-year-old COVID-19 patient gives birth to twins at LUTH
Next Whereabout of the 15 Chinese revealed !..their mission