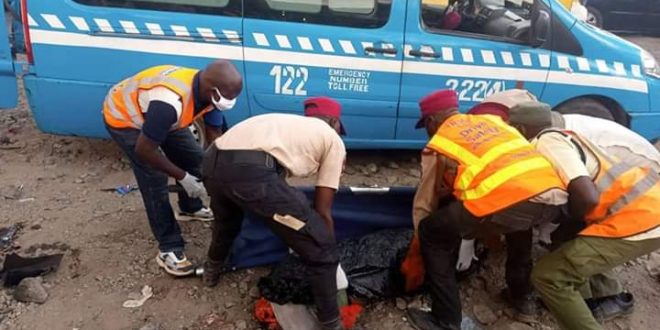 The FRSC Ogun State Command reports a fatal crash that killed two (02) people around the old Toll Gate , at Ota , opposite the FRSC Command, along the Lagos – Abeokuta Expressway on Wednesday 20 May 2020.

The sad incident occured at about 1738 hrs and claimed the lives of two Male Adults .

A total of 18 people made up of 16 Male Adults and 02 Female Adults were involved in the crash with 06 people sustaining various degrees of injuries .
Those injured comprised of 05 Male Adults and 01 Female Adult.
A total of 05
vehicles were involved in the crash ,which comprised
a blue colured IVECO Truck with vehicle registration number AAA214XL
The second vehicle is a yellow coloured volkswagon committee bus with registration number KJA 929XG
The third vehicle is also a yellow coloured commutter bus with registration number KRD 835XU
The fourth vehicle is a red coloured Boxer Motorcycle
with registration number DED064QG
The fifth vehicle is a red coloured Bajaj Motocycle without a registration number.
The suspected cause was mechanical failure due to brake failure on the part of the truck heading towards Lagos, which loss control as the truck was descending the slope at the old toll gate at Ota .
The FRSC Rescue Team on hearing the impact of the crash immediately rushed across from their Command to the crash scene and were able to rescue the injured
victims to the Ota General Hospital, while the corpses of the two dead victims were deposited at the Ifo General Hospital.
The FRSC Sector Commander, Ogun State Command, Clement Oladele, comisorated with the victims of the avoidable crash and once again advised vehicle operators especially articulated vehicles to ensure their vehicles are in good condition before plying the roads .
The Sector Commander advised members of the public whose relations travelled in the ill-fated vehicles to contact the FRSC Command at Ota, or the two aforementioned hospitals for detailed information about the crash.