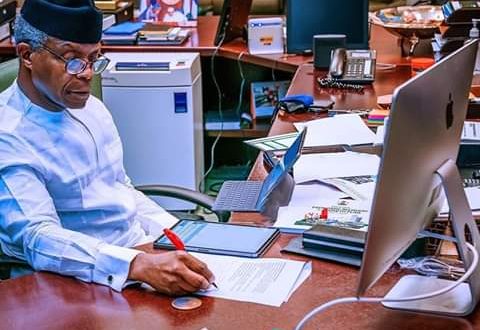 NEC, in first virtual meeting, has sets up Committee to liaise with PTF on reopening economy across the country

Members of the National Economic Council rose from their first virtual meeting today with a resolution to ensure a more effective synergy between the Federal Government and the sub-nationals especially in matters related to the fallouts of the COVID-19 pandemic.

This include how to effectively and efficiently reopen the Nigerian economy after the lockdowns and shutdowns across the country.

Chaired by Vice President Yemi Osinbajo, SAN, the Council, composed of all the 36 State Governors, the FCT Minister, Central Bank Governor and other top officials of the Federal Government, specifically decided today to set up a lean committee of seven to work with the Presidential Task Force on COVID-19.

The Committee to be led by Delta State Governor, Dr. Ifeanyi Okowa, also includes the Governors of Lagos, Kano, Bauchi, Anambra, Plateau, and the FCT Minister.

According to the Vice President, the Committee will ensure that there would be an even more effective collaboration and coordination between the Federal Government’s Presidential Task Force and the States of the Federation including the FCT