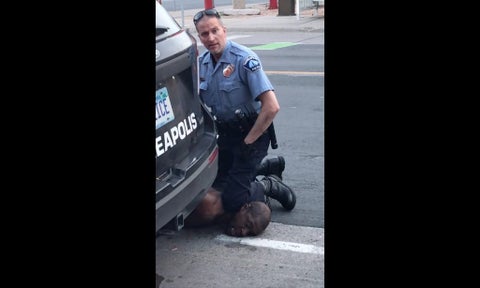 United States President, Donald Trump, has ordered an investigation into the killing of a middle-aged black man, George Floyd.

He described Floyd’s death as “very sad and tragic” while commiserating with his family on the loss.

The POTUS, who ordered the Federal Bureau of Investigation and the US Department of Justice to expedite the probe, vowed that justice would be served on the matter.

“At my request, the FBI and the Department of Justice are already well into an investigation as to the very sad and tragic death in Minnesota of George Floyd.

One of the officers was seen in a video kneeling on his neck while he was handcuffed.

“Your knee in my neck. I can’t breathe… Mama. Mama,” Floyd pleaded.

He slowly grew silent and motionless, unable to move even as the officers taunted him to “get up and get in the car”.

He was taken to hospital where he was later declared dead.

After dismissing the four officers involved, Minneapolis Mayor Jacob Frey expressed outrage as calls rose for them to be prosecuted for murder.

“What I saw was wrong at every level,” he said of the video.

“For five minutes, we watched as a white officer pressed his knee into the neck of a black man,” Frey added.

“Being black in America should not be a death sentence.”

The family of the late Floyd has called for the prosecution of the four officers, stressing that they should be charged with murder.

The death of the black man sparked street protests in the Midwestern US city.

Protesters, many wearing face masks because of the coronavirus outbreak, held signs saying “Justice for George Floyd” and “Black Lives Matter” during a rally near the scene of Monday’s death in custody.

But beyond the US, blacks all over the world have been outraged by the inhumane treatment as they took to the Social Media to vent their angst over the killing of Floyd.