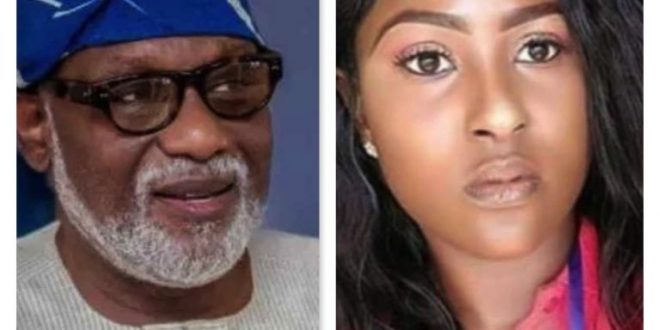 Governor Oluwarotimi Akeredolu is under fire in Ondo state for appointing 26-year-old Owerri-born Ngozi Ugochi-Igbo as a Special Assistant on Gender, Research and Documentation.

Ngozi’s appointment was announced on Sunday, to the shock and disappointment of some of the residents because she is from Owerri, Imo state.

Some other residents however welcomed the appointment.

An Ondo indigene who once lived in Enugu, Lulu Fawehinmi said he was once appointed an SA to the Governor of Enugu State.

“It’s unfortunate that some people have stayed so long in a society within the west. In 2013, I was a young man working in Enugu as an errand boy. The Governor then, appointed me as an SA. Heaven didn’t come down. Stop being tribal. One Nigeria”

However, loyalists of the ruling All Progressives Congress in Ondo are not happy, that Ngozi has taken what should be their entitlement.

Wole Babalola described the move as a deliberate slap on the faces of APC members who he said were yet to be compensated for their electoral support for Akeredolu.

Babalola said the appointment had further dampened the morale of party members, particularly youths across the various wards.

“I’ve never seen a thing like this. It seems the governor is now telling us to our faces that we don’t amount to nothing despite our commitments and loyalty to him.