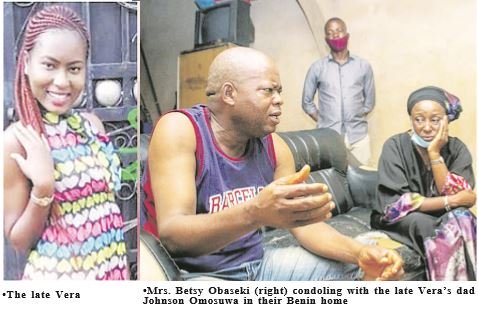 Federal Government on Tuesday weighed in on the rape and murder last week of Miss Vera Omosuwa, a first-year student of the University of Benin (UNIBEN).

The government ordered that investigation into the attack be thorough.

Inspector-General of Police Mohammed Adamu ordered the immediate transfer of the investigations from the Edo State command to the Force Headquarters in Abuja.

Omosuwa, 22, was raped and brutally killed by unknown assailants in a church in Benin City.

Force spokesman DCP Frank Mba, in a statement yesterday,  said the IGP’s directive was sequel to the preliminary report from the team of investigators and forensic experts earlier deployed to assist the Edo State police command in the investigations.

He said, “The DIG in charge of the Force Criminal Investigation Department (FCID), DIG Anthony Ogbizi Michael, will henceforth provide direct supervision and ensure speedy and thorough investigation of the case.