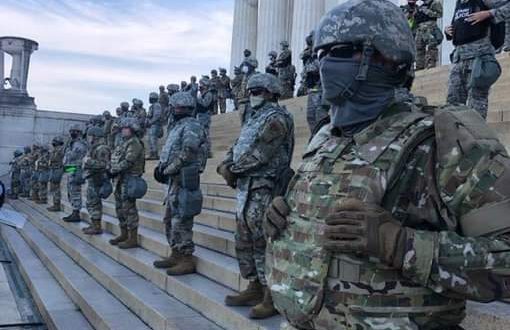 President Donald Trump of the United States of America (USA) may have unwittingly and ignorantly premeditated a possible outbreak of war in the country, with the killing of Floyd George by the police, last week.
Wife of former President Bill Clinton and the candidate of the Democratic Party in the 2016 US presidential election, Mrs Hillary Clinton, gave an insight into the mindset of President Trump, saying he was not capable of leading the country and its people away from the precipice of war.
She described Trump as unprepared and temperamentally unfit to hold the Office of the President of the US (POTUS), an office which she said required knowledge, stability and immense responsibility.
George, black and a 46-year-old father of two was killed by a white police office officer, Derek Chauvin, after he was suspected to have passed a counterfeit $20 bill in Minneapolis, Minnesota.
His death has sparked a violent row of violent protests, destruction and looting across many states in the US, just as the black community in the country have been pointing fingers at President Trump, accusing him of being a racist who was trying to shield Chauvin and his three colleagues from facing the full wrath of the law.
Hillary, addressing party supporters before the 2016 presidential election, had warned that Trump was not fit and unprepared for the office of the POTUS and described him as someone whose “ideas aren’t just different- they are dangerously incoherent.”
Warning the people of the inherent dangers of having Trump as their president, she had said: “Americans aren’t just electing a president in November. We’re choosing our next Commander – In- Chief, the next person we count on to decide questions of war and peace, life and death.
“And, like many across our country and around the world, I believe the person the Republicans have nominated for president cannot do the job. Donald Trump’s ideas aren’t just different- they are dangerously incoherent.
“They are not even really ideas, just a series of bizarre rants, personal feuds, and outright lies. He is just not unprepared, he is temperamentally unfit to hold an office that requires knowledge, stability and immense responsibility.
“This is not someone who should ever have the nuclear codes because it’s not hard to imagine Donald Trump leading us into a war just because somebody got under his very thin skin.
“Diplomacy is often the only way to avoid a conflict that could end up exacting a much greater cost. It takes patience, persistence, and an eye on the long game. But it worths it.
“Take the nuclear agreement with Iran. When President [Barack] Obama took office, Iran was racing towards a nuclear bomb. Some called for military action. But that could have ignited a broader war that could have mired our troops in another Middle Eastern conflict.
“President Obama choose a different path. And I got to work leading the effort to impose crippling sanctions. We brought Iran to the table. We began talks. And eventually, we reached an agreement that should block every path for Iran to get a nuclear weapon.
“Donald Trump said we shouldn’t have done the deal: We should have walked away. But that would have meant no more global sanctions, and Iran resuming their nuclear programme, and the world blaming us.
“So then what? War? Telling the world, good luck, you deal with Iran? Of course, Trump doesn’t have answers to those questions. Donald Trump doesn’t know the first thing about Iran or its nuclear programme. Ask him. It will become very clear very quickly.
“Now imagine Donald Trump sitting in the Situation Room, making life-or-death decisions on behalf of the United States. Imagine him deciding whether to send your spouses or children into battle. Imagine if he had not just his Twitter account at his disposal when he’s angry, but America’s entire arsenal.
“Do we want him making those calls-someone thin-skinned and quick to anger, who lashes out at the smallest criticism? Do we want his fingers anywhere near the button?
“Well, I have a lot of faith that the American people will make the right decision. This is a country with a deep reservoir of common sense and national pride.
“And we’re all counting on that because making Donald Trump our Commander-In-Chief would be a historic mistake. And it would undo so much of the work that Republicans and Democrats alike have done over many decades to make America stronger and more secure.
“It would set back our standing in the world more than anything in recent memory. And it would fuel an ugly narrative about who we are-that we are fearful, not confident. That we want to let others determine our future for us, instead of shaping our own destiny. That is not the America I know and love,” Mrs Clinton had warned then.