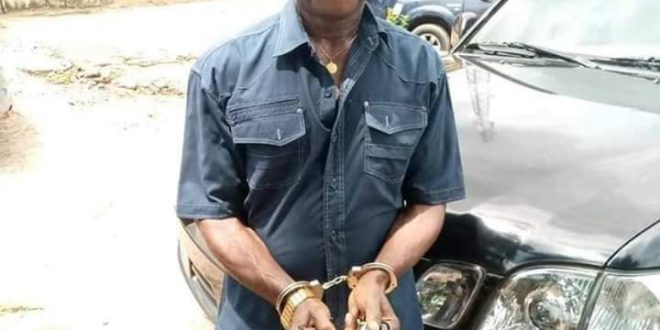 One of the richest men in Anambra State and the Chairman of Best Aluminium Ltd, Chief G O Nweke has been arrested with an unlicensed gun.

The native of Abba was arrested today at Awada Onitsha, Anambra state and is being detained pending further investigations

Information has it that the Onitsha-based industrialist was trailed by some heavily-armed policemen from his house to his factory in Onitsha where he was undressed and handcuffed, with a pistol on his hand.

Last week, bulldozers accompanied by security operatives demolished the exquisite compound of the business mogul and those of his family members in his country home.

It was gathered that the demolition was as a result of a court judgement which gave Ukpo victory over Abba on a land issue.

The two neighbouring towns of Ukpo and Abba in Dunukofia Local Government Area have been in a protracted land dispute.

At the time Nweke was being arrested in Onitsha, scores of people from his country home of Abba were at the Governor’s Lodge in Amawbia, Awka South Local Government of the state, pleading for the state government to intervene over their dispute with Ukpo.

An unsigned statement circulating in the state on Friday read: “The state police command in Anambra has arrested a top businessman and chief executive officer of  Best Aluminum Company, Chief Pius Nweke  for being in possession of a pistol gun without license. “Illegal possession of firearm is a criminal offence that carries a jail term of not less than three years or in special circumstances 11 years.

“It is only the president that is authorized by the constitution to grant licenses for pistol guns in the country while other firearms can be licensed by the police.

“It was reliably gathered that the case of Chief Nweke is to be transferred to force headquarters for further investigations.”