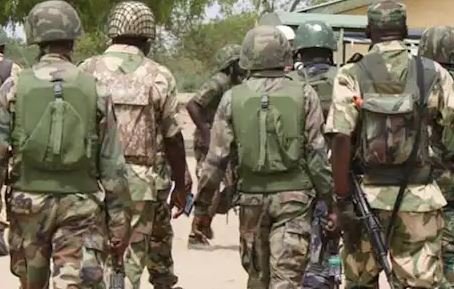 No fewer than 70 bandits and cattle rustlers terrorising Kaduna State have been killed during a clearance operation by troops in Kachia forest in Chikun Local Government Area of the state.

Two of the bandits’ logistics suppliers were also captured by troops at the outskirts of Kankomi village.

The operation was conducted by troops of Operation Thunder Strike under Operation ACCORD in conjunction with troops of 312 Artillery Regiment and local vigilantes.

According to a statement by the Coordinator, Defence Media Operations, Major General John Enenche, “in a combined ground and air offensive on 5 June 2020, troops of Operation THUNDER STRIKE under Operation ACCORD in conjunction with troops of 312 Artillery Regiment and local vigilantes conducted a clearance patrol to Kachia Forest and neutralised some armed bandits/cattle rustlers.

“This followed timely and credible information on the bandit’s movement within the area. Troops pursued the bandits through Gidan Maikeri village in Chikun LGA into the forest. Their location was identified and consequently engaged by Nigerian Air Force helicopter gunships. After the air interdiction, seventy (70) bandits were confirmed killed by human intelligence while others escaped with injuries. The troops are exploiting the forest: Details to follow as they unfold.

“As a matter of security concern, people in this general area should report those with sudden and suspicious injuries to the security forces. This is to ensure that the escapees are mopped up”.

“The military high command congratulates Operation THUNDER STRIKE, Operation YAKI and Air Component of Operation ACCORD, for their dexterity. While the general public is requested to continue to provide timely and credible information that would assist in eliminating bandits and other criminal elements in the country”.