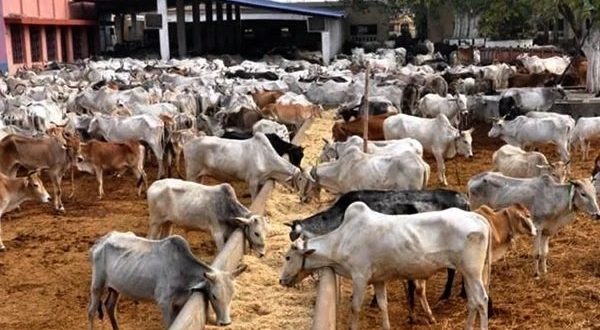 Governor Abdullahi Umar Ganduje of Kano State has called on the federal government to put a halt to the movement of herdsmen from other African countries to the country.

He made the call during the commissioning of 25 housing units of RUGA settlement project at Dansoshiya forest, in Kiru local government, hinting that, “This is the first batch of the housing units of 25 out of 200 units earmarked for construction.”

According to him, the call was necessary in order to “successfully and effectively prevent the coming of herdsmen from other African countries, because they come to this country with guns and other weapons.

Which flame the clash between herders and farmers. As they come with such weapons, they take crimes and criminalities to the country.

That movement is what brings to us all sorts of clashes between herders and other communities, apart from the farmers.”

Dansoshiya RUGA, the governor added, would serve as nucleus of RUGA settlement project in the state, explaining that, “We engage in this project for three fundamental reasons, first and foremost is to avoid clashes between farmers and herders, secondly to avoid movement of herders which is the source of conflict and to avoid cattle rustling.”

Criminal activities the governor said would be curtailed with the establishment of RUGA settlement, which include, cattle rustling, kidnapping, armed robbery among other criminalities.

“It is absolutely necessary to improve and modernise breeding system for Fulani cattle. As it is clear that a gallon of milk is more expensive than one gallon of petrol, it is therefore necessary for us to utilise this great opportunity,” he said.