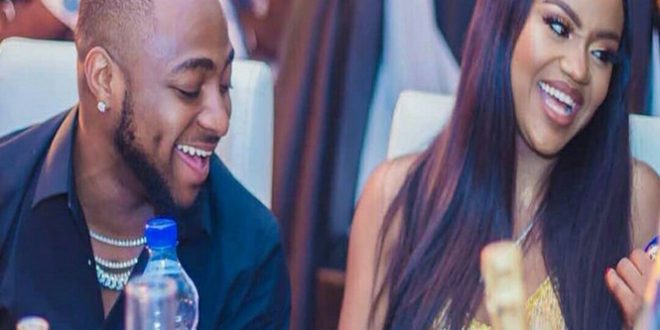 This isn’t the best season for music act, Davido and his fiancée, Chioma Rowland/

It was a story that had been on the lips of many since Yasmin Lorenco A.K.A Larissa London, posted maternity shoot photos.

The UK-based makeup artist, who was born and raised in Angola, was rumoured to have been pregnant for David Adeleke aka Davido but he denied the reports.

According to the report, Larissa had been in Davido’s life since 2017, (see her in the background of his picture with Cardi B back in 2017.}

Meanwhile, a report from Gist Merchant, an Instagram blog, disclosed that Larissa welcomed her son in March 2020, and went off social media when the rumour initially started and have now returned.

Davido is reportedly currently denying the baby and blocked her so she has no access to him, as he is trying to save face with his fiancee Chioma.

However self-acclaimed investigative journalist, Kemi Olunloyo, who had kept talking about Davido’s infidelity to Chioma, and vice versa took to social media to mock the couple.

“Mrs Adeleke V, Pele Chioma,” she wrote. On twitter, she mocked and tweeted