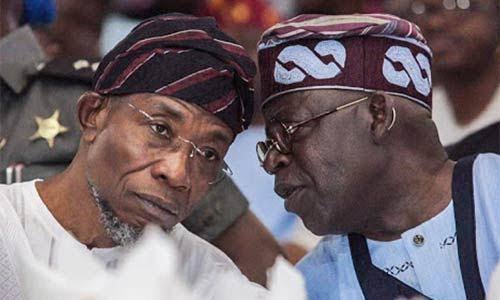 Unknown to many, the proscription of the Mandate Group alongside other groups like Justice Forum on tuesday by the former governor of Lagos state and national leader of the APC, Bola Tinubu at the Governors Advisory Council,GAC,was as a result of the planned take over of the All Progressives Congress in Lagos state by the former Governor of Osun state and Minister of Interior, Rauf Aregbesola.

According to a reliable insider,The Mandate song,” On your Mandate Tinubu” which has become an anthem is to be rendered henceforth only when Tinubu is seated in a meeting and not the other way round.
The meeting which held at the Marina Government House had Governor Sanwo-Olu and his Deputy, Obafemi Hamzat in attendance. Other leaders at the meeting include, Alhaji Tajudeen Olusi, Cardinal Odumbaku, Senator Tony Adefuye, Fashola’s Deputy, Sarah Sosan among others.
Tinubu was irked that Sanwo-Olu’s Chief of Staff, Tayo Ayinde attended the Mandate meeting without clearance from his principal. Also, the fact that Enilolobo had constituted a reconciliation committee without the state APC chairman’s input was seen as an affront and an attempt to take over the party.
The ban coming barely three weeks after Aregbesola relaunched Mandate group with fanfare at his Ikeja residence was a master stroke to checkmate his growing influence in Lagos politics.

At the reconstitution of the Mandate group, Abdullahi Enilolobo was appointed coordinator, while cardinal Omolaja Odumbaku was named apex leader. The meeting which had in attendance the senator representing Lagos East, Bayo Oshinowo, aka Pepper, that of Lagos west, Olamilekan Solomon aka Yayi, and Governor Sanwo-Olu’s Chief of Staff, Tayo Ayinde Akinmade and other stalwarts named Aregbesola as grand patron.

This move was said not to go down well with some leaders who would rather prefer that he remains an observer in Lagos politics like the Minister of Information and Culture, Alhaji Lai Mohammed, who resides in Lagos but represents Kwara in Federal cabinet.

It is an incontrovertible fact that though, Alhaji Mohammed was the Chief of staff to Tinubu between 1999 and 2002, since he relocated to Kwara to take a shot at the governorship which was not successful in 2003, he has maintained an observer status in Lagos APC, preferring instead to operate from Kwara.

Though, Aregbesola is seen as Tinubu’s man Friday and defacto second in command, the Minister of Interior may have lost all that through his indiscretion, according to a source close to the duo.
His meddling in Lagos politics has started pitching the members of the party against each other in Lagos state.
Sources at the meeting told Newsnow that most of the leaders of the APC in the state were not comfortable with Aregbesola who left Osun state almost immediately after the election and relocated to Lagos.

The rumour was rife in 2019, that he was warming up to contest the Lagos west senatorial district when senator Yayi was making moves to relocate to Ogun state for the governorship before the plan was jettisoned.

The gradual take over by Aregbesola began when he launched attack against former governor Akinwumi Ambode and stopped him from being re-elected despite his performance.

He was to follow up with the plan take over of the Lagos state House of Assembly where he has become a threat to the Speaker Mudashiru Obasa. Although, both Tinubu and Aregbesola will never show their grievances openly, but this is being done through subtle attack at intervals.

Those in the know say Aregbesola was not pleased that the governor of Osun state, Mr Gboyega Oyetola, who has practically turned him to a person non grata in a state he governed for eight years, rubbishing all his legacies is Tinubu’s cousin.

He was particularly irked that all the darts thrown at him had Tinubu’s imprimatur. “ Why didn’t Tinubu intervene to call his cousin to order, Aregbesola, whose real candidate that he prepared to take over from him in 2018 was senator Ajibola Bashiru, his former Commissioner of Justice and Attorney General, but had to drop him at the instance of Tinubu,he was said to have complained to some of his aides recently.

Tinubu on the other hand was also not happy about how Aregbesola handled Osun’s governorship election in 2018 despite huge campaign funding, managing to win only two out of the six local governments in Osun East senatorial district.

Even the lead in Ilesa East and West his base, were not significant enough to make any appreciable difference.

The last straw that broke the overburdened camel’s back was the statement credited to the Governor of Kaduna state, Malam Nasir el-Rufai a fortnight ago at Aregbesola 63 birthday colloquium, where he declared that he prefer Aregbesola to Tinubu.

That’s the second time that El-Rufai will come to Lagos and openly deride Tinubu and rubbish his godfatherism in Lagos politics.

Shortly after the 2019 general election, the loquacious Governor was in Lagos where he attacked Tinubu and lectured those at the meeting held at Victoria Island on how to defeat him if they so wish.

And Aregbesola seems to be acting the script when he reconstituted Mandate Group without the imprimatur of Tinubu last month preparatory to 2023.

The outcome of the meeting yesterday will continue to reverberate in Lagos APC as members battle for the soul of the Party in Lagos ahead of Tinubu’s presidential project, which has started in earnest.
@newsnow