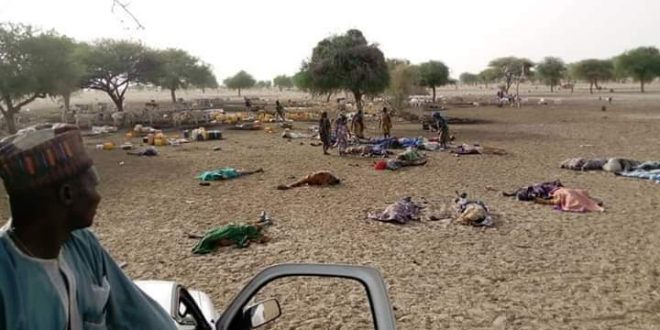 It was a terrible massacre. They were trick, and they die enmasse.
The survivor of Boko Haram’s Tuesday attack on Fanduma Koloram, in the Gubio Local Government Area of Borno State told the State Governor, Babagana Zulum, on Wednesday that the insurgents pretended to be Islamic religious crusaders, collected arms from herders and killed 81 persons

* BH arrived Faduma Kolomudi village in Gubio LGA 10 am and gathered people and promised that they came in peace just to preach and give Islamic lectures. They left 4 pm.

* All men’s weapons like Dane guns, arrows and bows were collected so that the Islamic lectures would be delivered in peace!!!

* As they pretended to start the lectures, they started shooting and strong people managed to escape. But

49 corpses were later buried
32 corpses taken away by relatives from the neighbouring villages.
7 persons abducted including the village head.
400 Cattle taken away.

The survivor, who said he called for help from neighbouring village to bury 31 of the 81 victims of the attack in a mass grave, told the governor that apart from the 81 persons left dead, 13 were injured, while seven others were abducted in the Tuesday’s attack.

He said, “The insurgents disguised as if they had come to enlighten the community, disarmed the herders and shot all of them, including the underaged, and even their animals. They abducted seven people.”

Zulum, who was annoyed, urged the military to begin a final onslaught that should put an end to the insurgents in the shore of the Lake Chad.