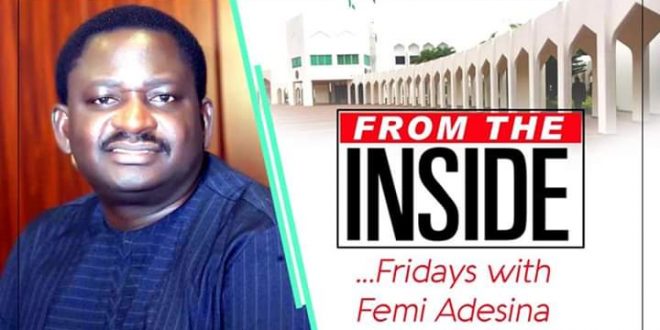 Wednesday June 10, 2020, was ‘judgment day’ for Minister of Interior, Ogbeni Rauf Adesoji Aregbesola.
Incidentally, the day had broken with stories of denials of rift between him and his political mentor, Asiwaju Bola Ahmed Tinubu, former two-term Governor of Lagos State, and National Leader of All Progressives Congress (APC).
The APC had outlawed all party sub-groups in Lagos, where Aregbesola had his political foundations, and still maintains a stranglehold, despite having been a two-term Governor in Osun State.
The buzz was that the Minister was possibly eyeing the Presidency in 2023, a diadem also reportedly coveted by his mentor, so the rug had to be pulled off under his feet early enough. Frost followed. Cold War, said the rumor mills.
Strident denials came from the Tinubu and Aregbesola camps. And it was mere distraction for the Minister, as he had a huge assignment ahead of him on that same Wednesday. It was his turn to brief the Federal Executive Council, headed by President Muhammadu Buhari, on his stewardship, since assuming office in August last year.
Called Ministerial Performance Report, it was something instituted last year to receive regular feedbacks from Ministers, to judge whether they were complying with the spirit and letters of the mandates handed over to them when they were sworn in 10 months ago. It is something like a peer review session, in which the President, the Vice President, and all members of the Federal cabinet would listen, dissect, interrogate, applaud or bash the Minister reporting, depending on performance.
It is usually like judgment day, in which a man gives account of his works, and he either hears, “well done, good and faithful servant, enter into the joy of your Master,” or he is told; “depart from me, you worker of iniquity.”

The Ministry of Interior exists to foster and ensure the maintenance of internal security, public safety and citizenship integrity, for the promotion of good governance of the nation.
There are four main agencies and a Board under the supervision of the Ministry. They are: Nigerian Correctional Service (formerly Prisons Service), Nigeria Immigration Service, Federal Fire Service, Nigerian Security and Civil Defence Corps, and Civil Defence, Correctional, Fire and Immigration Services Board.
Now, it is very easy for citizens to live their lives, and not be mindful of these agencies. They just take them for granted, reckoning that they must just be there. But after listening to the performance report of the Minister, one comes to grasp with the reality that they do make a lot of difference in the lives of the citizenry. Without them being efficiently there, lives would be a lot worse. Nasty, brutish and short.
Do you know that the Ministry of Interior is vested with ensuring timely processing of permits for those coming to the country to establish businesses? Possibly not. Do you also know that the Ministry processes expatriate quota in line with the Executive Order on Ease of Doing Business? It equally is vested with easing of tourist visa, biometric visa at all entry points into the country, and many others.
So, how well has the Ministry fared in 10 months? The Cabinet listened, as Aregbesola reeled out the achievements, agency after agency.
When you fail to plan, you plan to fail. Which was why the Minister took the key officers of all the agencies to a resort in Ilesa, Osun State, early in the year. The purpose was a Strategy Retreat aimed at aligning mandate delivery.
Within five months last year, the Federal Fire Service responded to 2,615 fire calls, saved 724 lives and assets worth N1.629 trillion across the country. We take things like this for granted, don’t we? May we never see the fury of fire, as it ravenously devours everything in sight with its furious tongues.
At least 3,000 Custodial Centers are under construction and in various stages of completion in the six geo-political zones of the country. It would assuage the problem of congestion to a large extent.
Custodial Farm Centers have been reactivated round the country for large scale agricultural production in piggery, fishing, cattle rearing and poultry. Tractors and harvesters have been procured to facilitate the work, and contribute to food security in the country. Trust President Buhari, any opportunity to feed Nigerians, he utilizes.
There’s rehabilitation program, aimed at reducing the rate of recidivism (that’s big vocabulary, which means going to jail again and again) by engaging inmates in both vocational and entrepreneurial initiatives.
About 1,000 inmates were enrolled for the 2020 WAEC/NECO examinations, while the number of study centers of the National Open University of Nigeria have been increased to 10 across Custodial Centers.
The Border Management Strategy (BMS) has begun, and is being implemented at all international airports in the country. Management Information and Data Analysis System (MIDAS) is now deployed at all air borders. Very easy to fish out anyone with criminal records from anywhere in the world, attempting to enter the country.
Nigerian passports can now be applied for online, while there’s also Visa-On-Arrival with biometric features at all air borders.
At the social end, the statutory marriage process has been automated to make things easier. Young people must marry, mustn’t they?
The Federal Fire Service is now present in all states of the country, with 28 newly procured fire engines deployed.
Six new fire service training schools have been established across the geo-political zones to cater for human capital development needs.
Over 5,000 officers of the Civil Defence have been deployed to protect IDP camps, and re-occupy liberated towns and villages in the North-East.
The Ministry has trained and deployed over 1,500 personnel as Agro-Rangers in Yobe and Adamawa states, to protect farmers and their farms. This will eventually go round the country as required.
And many more.
Minister Aregbesola took questions, made explanations, gave clarifications, and it was obvious that council members were satisfied.
No wonder when the meeting was over, his well starched white Agbada billowed in the wind, as he left the Presidential Villa.

*Adesina is Special Adviser on Media and Publicity to President Buhari