Home » Entertainment » Celebrity » Buhari opens up on fight between wife, aide at the villa 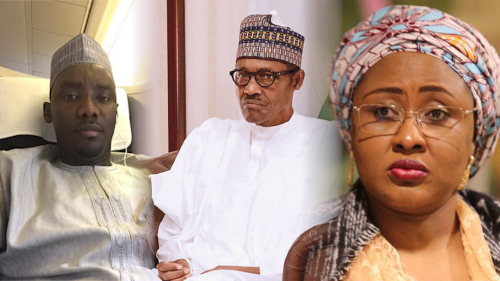 Buhari opens up on fight between wife, aide at the villa

Presidency has reacted to the recent fracas involving gunshots at the Presidential Villa between the wife of the President, Aisha Buhari and Sabiu ‘Tunde’ Yusuf, the President’s influential Private Secretary and favourite nephew.

President Buhari said he has ordered an investigation into the incident, stressing that the law would be allowed to take its course.

Read the full statement below:

“The Presidency wishes to acknowledge concerns expressed by several members of the public regarding the recent incident among the occupants of the State House which escalation led to the arrest of some staff by the police.”

“This is to assure all and everyone that the President and Commander-in-Chief of the Armed Forces, Muhammadu Buhari, is not, and was not at any time in any form of danger arising, either from deadly infections or the reported incident by security personnel which is currently under investigation.”

“This particular incident happened outside the main residence of the President.”

“Armed guards and other security personnel assigned to the State House receive the necessary training of especially weapons handling and where they come short, their relevant agencies have their rules and regulations to immediately address them.”

“Having authorized the proper investigation to be carried out into this unfortunate incident by the Police, the President has acted in compliance with the rule of law.”

“That a minor occurrence is being used by some critics to justify attacks on the government and the person of President Muhammadu Buhari beggars belief.”

“In this particular instance, the President says the law should be allowed to take its course.” the statement read.