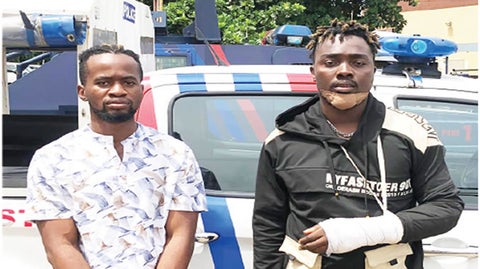 The suspects, Chinonso Michael, an afro hip-hop singer, and Chimelu Victory, a pianist, were arrested by the decoy team of the Rapid Response Squad for allegedly defrauding a dispatch rider with a fake bank alert.

It was gathered that the suspects, on April 10, 2020, ordered an iPhone 11 Pro Max valued at N450,000 from an online platform, Jiji.com, and were to pay on delivery at a service charge apartment they were staying.

The suspects, Chinonso Michael, an afro hip-hop singer, and Chimelu Victory, a pianist, were arrested by the decoy team of the Rapid Response Squad for allegedly defrauding a dispatch rider with a fake bank alert. upon receiving the phone,

Victory generated a fake alert for the dispatch rider, one Itunu Anifowoshe, and escaped from the apartment with the

The suspects sold the phone to a buyer in the Ogba area of the state for N350,000, which was transferred into Michael’s bank account.

It was gathered that Michael fractured his arm and bruised his chin, while he and Victory jumped from the first floor of their apartment at No. 4 Modupe Young Thomas Estate, Ajah, on sighting the police.

The suspects, who confessed to the crime, stated that that was their third time of selling iPhone 11 Pro Max during the lockdown, adding that two of the phones were bought online with stolen credit cards.

In their confessional statement to the police, the suspects, who were performers at some clubs in the state, attributed their actions to the lockdown.

The suspects reportedly said in their statements, “During the lockdown, nothing was going on and we didn’t have anything to eat for two weeks. We already owed all the store owners in the neighbourhood.

“Nobody was ready to sell to us on credit anymore. We had to devise a means to survive the lockdown.”
hunger musician pianist nabbed for robbery blame lockdown slideshow 2020-06-15
Younews Ng
Share