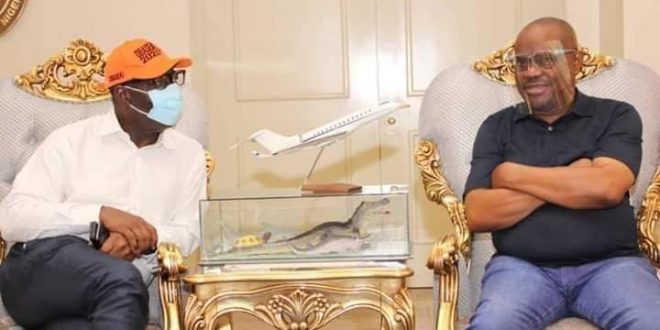 Rivers State Governor, Nyeson Ezenwo Wike, on Sunday evening received his Edo State counterpart, Godwin Obaseki at the Rivers State Government House, Port Harcourt following the disqualification of the Edo State Governor from participating in the forthcoming primary election under the platform of the All Progressives Congress (APC) for his reelection.

The reason for the embattled Edo State Governor visit to the Rivers State Government House, may not be unconnected to rumours of his defection to the Peoples Democratic Party(PDP), as the meeting between the two South South State Governors were held behind closed door.

Recall that the APC National Working Committee(NWC), on Saturday night upheld the disqualification of the Edo State Governor, Godwin Obaseki from participating in the forthcoming Governorship primary election in the State on the grounds that his HSC and National Youth Service Corps (NYSC) certificates were “defective”.
There have been rumours that the Edo State Governor has dumped the APC for PDP but the Governor is yet to make public his decision as at the time of filling in this report from Port Harcourt on Sunday evening.