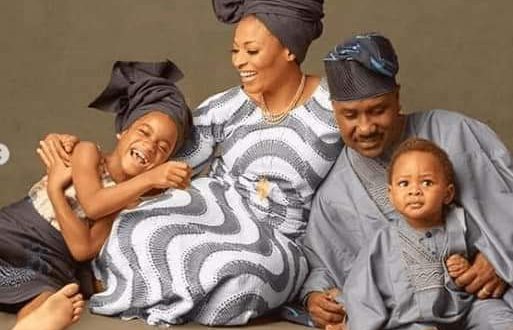 Ighadolo Ituah officiated another funeral a few hours after he lost his wife.

His wife died 2am on Sunday morning and he still went on to officiate at a burial service same day!

He spoke about life and how fickle life is.

Some are saying he needs ample consolation now..while some believe he is brave, that it is God grace that emboldened him.

‘ Pls Lord comfort and console him. He needs all the love, strength, prayers and support through this.’

“If you are his family/friend, find a way to SEDATE that man. He is in denial and cracking up.”

It’s an uncommon courage even if it means he is sulking inside. He looked into the open coffin of the son of Okoya he was ministering at his funeral hours of the death of his wife. I can say certainly that he didn’t see that Okoya son in the casket but his wife as his head was jerked up and away immediately. May the Lord hold him strong.

“It’s a tough one for a pastor expected to give hope to his mass of congregation. I remember the first wife of Pastor Kumuyi died during the church’s Easter programme and the pastor held on until the end of the retreat not to disrupt activities before the death was announced 24 hours later.

We all don’t react to grief in the same manner. Some people suffer from a “delayed grief syndrome”

For some people, it takes weeks for the grief to take its toll. I have a friend who started mourning the loss of a mutual friend one week after he died. We, the other friends were all like “hey, did you just know our friend died”?

Pastor Ituah may be one of such people.

For most people though, the grief is immediate and wears off as the days go by

I fully empathise with the Pastor. We need to show more understanding.

I watched the Video many times. And my take is that he was making a bold attempt to stay afloat. He dwelt more on his Loss and Pain than on the Funeral Service. In his words: “Life is a Mystery. Life is Nothing.”

Don’t read too much negative meaning into this. He is the chief mourner here, and if making a public appearance helps him to cope with his loss better, why should he be judged. For goodness’ this man has lost his wife suddenly. The talking point should not be the propriety or otherwise of making a public appearance. He is a pastor, who preaches to others, including the hurting. You do not know how many people who are hurting will draw strength from his action. If preachers and their followers actually believe what they preach, then once a person departs, his fate is sealed, and he is oblivious of all the elaborate mourning and fanfare in the name of befitting burial. Officiating at a funeral offered the pastor an opportunity to speak to the living. That’s more important than crying over what he can’t change.

Previous Buhari opens up on fight between wife, aide at the villa
Next Ighodalo preaches at funeral hours after wife’s death