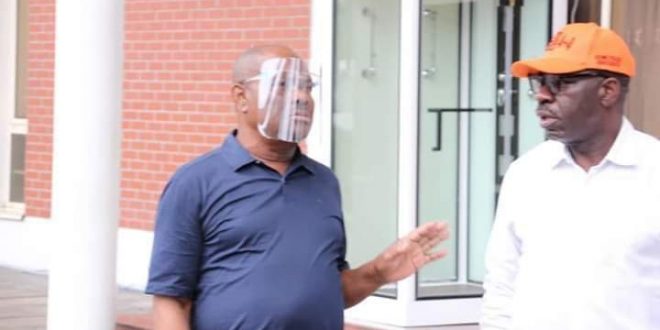 The Embattled Governor of Edo state, Godwin Obaseki may have secure the endorsement of all the governors of the Peoples Democratic Party (PDP) in the-South South to represent the main opposition party in the September governorship election in the state.

However, the state’s deputy governor Hon. Phillip Shaibu will be the sacrificial lamb for the deal which is expected to be wrapped up and announced early this week.

It is believed that the deputy governor would be compensated with another position if the PDP wins the election.

Over the weekend, Obaseki travelled to Port Harcourt in River State and Uyo in Akwa Ibom state to see governors Nyesom Wike and Emmanuel Udom to seek a final sealing of the deals for him to fly the PDP flag.
He had earlier in Abuja met with Wike, Udom, Delta State governor, Ifeanyi Okowa and Ben Ayade of Cross River state in intense consultations.
A reliable top PDP leader who pleaded anonymity on Monday, said that the outcome of the negotiations would be announced early this week when the national working committee (NWC) of the party would have given final approval to the agreements reached with Obaseki.