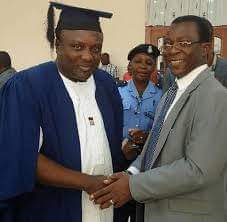 What does Saidi Osupa, the fuji act, stand to gain with a university degree , political science in University of Ibadan ?

when he is already a success in his music career?
How is he going to cope with academic demand which may and indeed will make him lose important shows and good money?
Does he have the real pre-requisite to study in a conservative academic environment like the University of Ibadan?
Is he going to the UI with his fuji status whereby he will be daily surrounded by army of his regular broad chests to and from lecture room?
Does he have the temperament to absorb some difficult lecturers’ diatribe?
What would he do if a lecturer, who never had time to listen to his music, asks him to “leave my class and never return”?
What really informed his choice of course among so many courses of study?
Is he a victim of inferiority complex and what really does he know about social sciences?
These and other questions are tips to my entertainment writer colleagues who by now ought to be getting set to engage Osupa in post-matriculation interview.
In my opinion, the guy is opening a new chapter in the history of fuji music created and nurtured by the late Dr Sikiru Ayinde Barrister. The little I know about the styled king of music shows him as a non-conformist who is always ready to take the bull by the horn and tread unfamiliar terrain without looking back.
I think he had unprecedentedly dropped four cds at a go when doing even a good one is energy-sapping.
Give it to him, Osupa is an unusual talent also on movie set. I have seen some good movies in which he stars and put up an incredible performance.
As an acclaimed rugged guy, he must have perfected his home work and made up his mind too to see his eight semesters through without recording carry over.
There is no doubting his appreciation of his limitation owing to lack of university education in a country where certificate is celebrated at the expense of competence.
I am dead sure that by the time Osupa is formally certified as a Bachelor of Science holder from the premier university, fuji scene will not remain the same.
He will hype and over-hype the certificate that his competitors would either go back to school or run out of stage.
From here, I am wishing him all the best in his new interest.