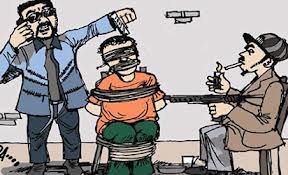 He is still under threat .
Alhaji Ibrahim Sarkin-Yaki, Village Head of Tungar Malam in Suru Local Government Area of Kebbi State, has regained freedom from his abductors..but they have been getting accross to threatening .

Tungar Malam is under the jurisdiction of Lamido Dakingari, Dakingari District of Gwandu Emirate, Kebbi State.

Speaking in an interview with journalists at Tungar Malam on Monday, Sarkin-Yaki appreciated God Almighty for sparing his life to personally tell the story.

Narrating his ordeal, he said: “The kidnappers, well armed with AK 47 rifles, stormed my house at about 12am on Sunday, June 7, and started beating my wives.

“They woke me up and asked me to give them money.

“II told them to wait so that we can scout for the money.

“Instead they decided to abduct me and took me into Gwauron Dutse bush, close to the highway linking Dakingari and Bunza town.

“They were eight in number.

“Each one of them had a rifle and they still had many others in a bag.

“We trekked for about five hours inside the bush.”

The village head said the kidnappers molested and assaulted him, inflicting injuries on him.