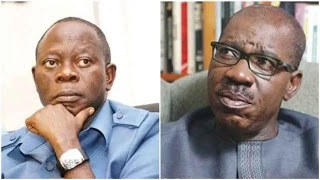 News Analysis : Should Obaseki look back ?

We have been seeing the angle asking what if the chairman of the Edo APC rejects Obaseki’s resignation as a member of the party. In practical politics, that is far from real.
Politics is free entry and free exit. APC did not hire Obaseki as a member, so the Edo APC chairman cannot retain him by rejecting his resignation.
Also the question of whether the governor will then be allowed to participate in the party’s primary having been embarrassed with open disqualification on the ground that he parades some kind of forged certificate cannot fit into the emerging scenario.

Screening has been done, he’s been disqualified and even their Appeal Panel has affirmed the decision despite that Obaseki never had a case before by way of appeal. So it’s very unlikely that he could be brought back in the primary holding next week.

Better for him to quit the den of sinners as he has already done with his resignation and seek the face of God elsewhere.

With the Appeal Court judgement decapitating Oshiomhole, Obaseki should just go ahead with his plans and move his supporters out of the party. There was hardly anything really consequential that those clapping behind Oshiomhole were banking on to drown the governor in the bitter battle for the soul of Edo government than the evil agenda that as National Chairman he will as usual be able to mobilise the military, police and the INEC to sack Oshiomhole from the Government House.

Forget the strength of the platform Obaseki might choose to run for the election, the simple mandate to the soldiers that would be deployed to Edo for the election duty is to shoot APC’s way to victory. But the story is not the same now that the court has chained the rabid dog.

Edo APC is now in a deep crisis and Obaseki doesn’t have to offer them his sympathy. Indeed, his best strategy is to move out his supporters, strip them naked and continue to do all he can to render them more badly tattered. He might just be able to get his campaigns better coordinated for him to win the election and make Oshiomhole and his supporters pay for their political sins.