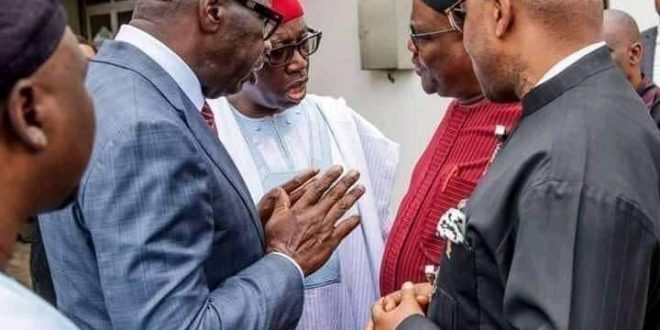 Obaseki makes U- turn, debunks defection, says ‘I’ve not moved to another party yet

Governor Godwin Obaseki of Edo State said on Wednesday morning that he has not defected to another political to seek reelection.
This is coming few hours after an Appeal Court upheld the suspension of the National Chairman of the All Progressives Congress (APC) Adams Oshiomhole, on Tuesday.
The National Working Committee of the party, has, in a statement signed by its National Publicity Secretary, Mallam Lanre Issa-Onilu, late on Tuesday night announced the former Governor of Oyo State and Deputy National Chairman of the APC from the South West, Senator Abiola Ajimobi, as the Acting National Chairman, pending the determination of the substantive suit filed against Oshiomhole.
It would be recalled that Obaseki has after meeting with President Muhammadu Buhari, on Tuesday announced his resignation from the party.
His deputy, Philip Shaibu, and other political associates from Edo State have also resigned from the APC with him.
There have been speculations that the Edo State governor might be heading to the Peoples Democratic Party (PDP) to actualise his ambition to contest for a second term in office.
The PDP speculations became rife after the embattled governor met with Governors Nyesom Wike of Rivers State, Emmanuel Udom(Akwa Ibom) and Governor Ifeanyi Okowa of Delta State on Sunday.
But, Obaseki, in an early morning tweet on Wednesday said:
“I have not moved to a new platform yet to seek re-election.
“My focus now is to control the spread of the coronavirus (#COVID19) pandemic, which is ravaging our country and threatening our healthcare system.”