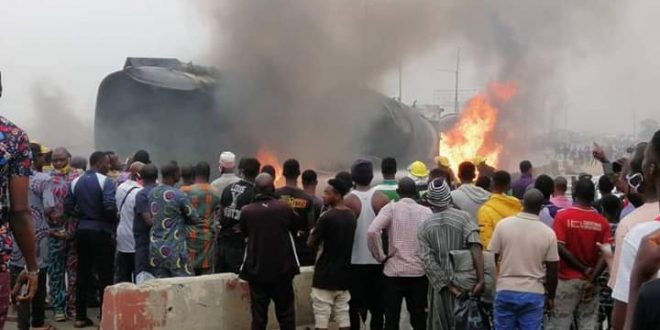 Not less than four persons were at the wee hours of Sunday feared dead after three petroleum tankers and an articulated truck exploded on Kara Bridge, Lagos-Ibadan Expressway.

The explosion occurred around 12:30am following collision of two tankers laden with Premium Motor Spirit (PMS) and Gas on the outward Lagos lane.

Aside the two tankers, the fire which followed their collision extended to another tanker and a trailer, said to have also exploded.

Fire Service were equally invited to extinguish the inferno .

The situation affected movement inward Berger Arrival into Kara Bridge at the moment.

The FRSC had to admonished motorists who had reasons to use the road should seek alternative for to allow the personnel of Fire Service on ground to extinguish the fire.

Alternative routes recommended for those moving out of Lagos this morning can use the Victoria Island by Ajah to Ijebu Ode to continue their journey.

The Lagos-Abeokuta Expressway to the Sagamu Interchange is another alternative.

The FRSC Sector Commander, Lagos State Command, Olusegun Ogungbemide, empathised with the motoring public especially those on essential duties and assured that the FRSC operatives would remain at the scene till normalcy is restored .

The Sector Commander, advises operators of vehicles used for transporting highly inflamable petroleum products should operate them in strict conformity with safety and operation standards prescribed by the 1957 United Nations Agreement Concerning the International Carriage of Dangereous Goods by Road (ADR), which Nigeria acceded to as a Contracting Party .