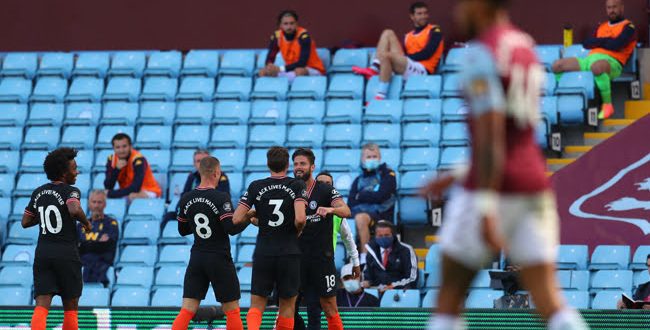 Chelsea staged an impressive second half fightback to beat Aston Villa 2-1 as Olivier Giroud’s winner consolidated their place in the Premier League’s top four on Sunday.

Frank Lampard’s side were rocked when Kortney Hause put Villa ahead against the run of play in the first half.

But Christian Pulisic came off the bench to equalise after the break before Giroud bagged his fourth club goal of the season two minutes later.

A first away league win of 2020 was the ideal way for Chelsea to return to action in their first match since the Premier League was suspended in March due to the coronavirus.

As has been customary in every match since the restart on Wednesday, a minute’s silence was held for victims of COVID-19, while both teams took a knee in support of the Black Lives Matter cause.

Chelsea midfielder Ruben Loftus-Cheek was making his first Premier League start since May 2019 after recovering from a serious Achilles tendon injury sustained during a friendly in the United States.

Loftus-Cheek, who had been close to full fitness before the lockdown, nearly marked his return with a goal when he headed just wide after powering past Tyrone Mings.

With that message in mind, he picked Giroud up front instead of Tammy Abraham, keeping faith with the French veteran after his impressive form before the hiatus.

Mason Mount, another of Chelsea’s breakthrough stars, did start and the midfielder tested Villa keeper Orjan Nyland with a stinging long-range drive.