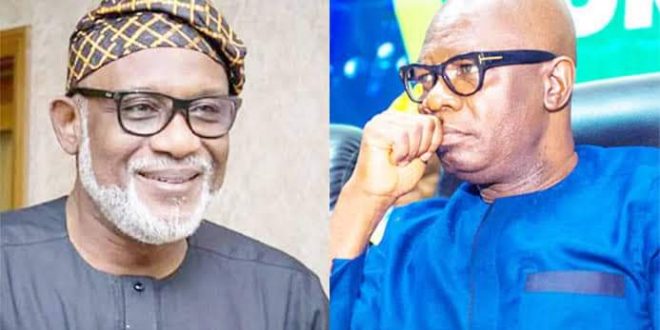 Raging drama in Ondo, as Akeredolu’s deputy decamps to PDP

In a viral video circulated by one of the aides to the deputy governor, Ajayi was seen confronting the police boss, asking him why he is being prevented from moving out of the seat of power.

A source, on Sunday that Governor Akeredolu sent the Police Commissioner to bar the deputy governor from leaving, following his planned defection to the opposition Peoples Democratic Party (PDP)

Confirming the incident, the Chief Press Secretary to the Deputy Governor, Babatope Okeowo said that Salami prevented Ajayi from moving out having gotten wind that some political thugs were coming to attack him there.

According to Okeowo, his principal was detained by the CP for about four hours, between 8pm and past 12 midnight

He added that the police at the Government House snatched the keys of the vehicle from the driver, while the driver abandoned the vehicle and left.

But in his reaction, the Chief Press Secretary to Governor Akeredolu, Segun Ajiboye debunked the incident.

He explained that what actually happened was that the deputy governor was about moving out of the government house in the night and the security detailed there advised him to wait till daybreak so that proper inventory could be done.

Meanwhile, the spokesperson of Ondo State Police Command, Tee-Leo Ikoro revealed that the police boss was invited by police details at the Government House to settle a clash between the governor’s aides and those of the deputy governor.

Ikoro said it was false that the governor ordered the CP to prevent the deputy governor from leaving the government house.

According to him, the CP was there to calm down the situation and prevent any breakdown of law and order that could arise due to the disagreement.

Few hours after the drama, the expected happened as

Ajayi did at his country home in Kiribo, Ward 2, Apoi, in Ese-Odo Local Government Area of the state.

The resignation of the deputy governor from APC puts an end to speculations that have been on concerning his planned defection.

Ajayi also used the opportunity to immediately pick his membership card of the Peoples Democratic Party (PDP) at his ward.

While addressing party supporters, the deputy governor said he is happy to be back to the PDP.