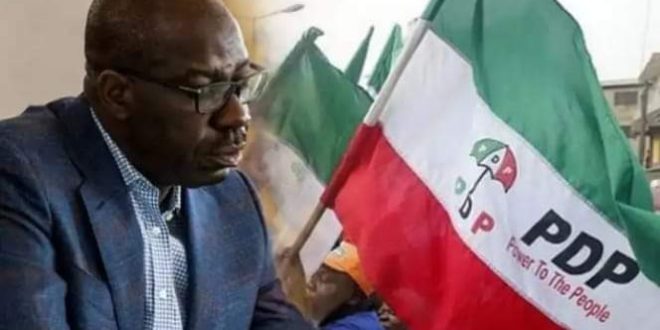 A Court has cleared the way for Governor Godwin Obaseki’s participation to participate in tomorrow’s governorship primary of the Peoples Democratic Party (PDP) in Edo State.

This comes after the Federal High Court in Port Harcourt struck out the suit by one of the governorship aspirants, Omoregie Ogbeide-Ihama, to have the Governor disqualified from the exercise.

The court had earlier granted the request by the litigant to have the matter stood down to enable an out of court settlement.

Mr. Ogbeide-ihama had filed a suit in the court asking it to prevent any member of the party that has purchased forms but not screened within the time stipulated to contest the PDP primary.

The court, yesterday, granted the request for an accelerated hearing of the suit but before the hearing on the application today, Ogbeide-Ihama’s counsel requested that the court stood down the case for some time.

The presiding judge, Justice Emmanuel Obile, granted the prayers after the counsel to all the defendants aligned with the request.

Governor Obaseki got a waiver of the PDP to join the race under its platform after resigning from the All Progressives Congress (APC).

Meanwhile, a High Court of Justice in the Ekpoma judicial division today restrained the Peoples Democratic Party (PDP) from excluding Governor Godwin Obaseki and the other cleared aspirants from participating in the Edo State governorship primary.

The court ordered that the PDP and the electoral umpire should not exempt any of the aspirants who have been cleared by the party from participating in the gubernatorial primary slated for the 25th June 2020.