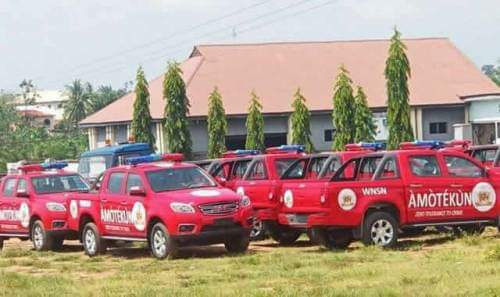 The herdsmen, upon seeing the security agencies, immediately launched an attack but were overpowered, and took to their heels.

over eight separate farmlands with crops such as maize and cassava were destroyed by the Fulani herdsmen.

“On seeing the owners of the affected farmlands, the heavily armed herders attempted to kill them but the farmers ran for their dear lives,” he said.

The Amotekun Corps got wind of the incident following the reports made by the helpless farmers.

Then, the Corps, in a joint security network with the Agro-Rangers of the NSCDC, immediately swung into action by visiting the area.

The herdsmen, upon seeing the security agencies, immediately launched an attack but were overpowered, and took to their heels.

No fewer than 42 cows belonging to the herdsmen were later seized by the Corps in the process.

While decrying the level of destruction to the farmlands, Adetunji Adeleye, Commander of the Ondo State Security Network Agency, codenamed “Amotekun Corps vowed that the herdsmen would be made to pay for the crops destroyed and subsequently face prosecution.

One of the farmers, Olawale Aluko, lamented how the armed herdsmen had been destroying their crops. Aluko called for help to stop the incessant attacks and harassment.

Previous Edo Election: Over 2,200 Delegates To Vote In PDP Primary
Next 5 murdered within weeks @ same spot in Ibadan