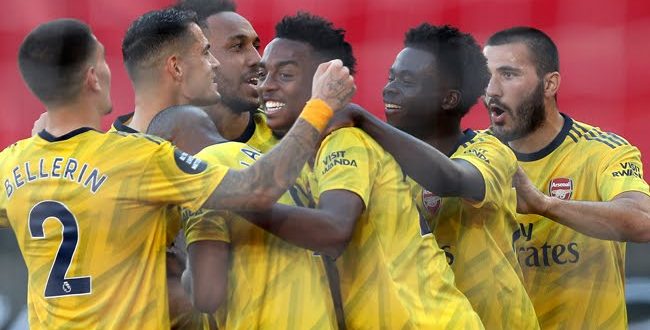 Arsenal kept alive their hopes of qualifying for Europe as Eddie Nketiah punished a howler from Southampton goalkeeper Alex McCarthy to inspire a much-needed 2-0 win on Thursday.

Mikel Arteta’s side were handed the opener in the first half at St Mary’s when Nketiah picked off McCarthy’s pass and fired home.

Joe Willock doubled Arsenal’s lead late in the second half, moments after Southampton’s Jack Stephens was sent off for bringing down Pierre-Emerick Aubameyang.

That wretched run effectively ended their bid to reach the Champions League and sparked criticism of Arteta’s decision to give new contracts to David Luiz and Cedric Soares despite their problems with poor form and injuries respectively.

Against the dispiriting backdrop, Arsenal’s success at St Mary’s, which lifted them into ninth place and kept them in the hunt for a Europa League berth, was a welcome tonic for Arteta.

Arsenal had kicked off with 40 points, which ranked as their joint lowest tally after 30 games of a Premier League campaign.

Matteo Guendouzi was dropped just days after reports that Arteta has grown frustrated with the French midfielder’s behaviour, while Alexandre Lacazette and Mesut Ozil were left on the bench.

Guendouzi reportedly taunted Brighton players about how much he earns during Saturday’s match and clashed with Seagulls striker Neal Maupay after the final whistle, with his absence at St Mary’s put down to “squad management” by Arteta.