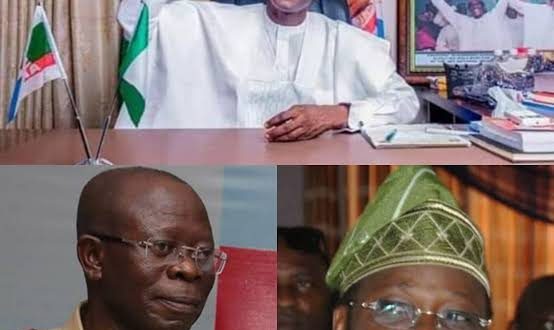 Yobe State Governor, Mai Mala Buni, has been appointed as the chairman of the Caretaker Committee of the All Progressives Congress (APC).

This followed the dissolution of the party’s National Working Committee (NWC) by the APC National Executive Committee (NEC) on Thursday.

The council took the decision at a virtual emergency meeting, based on the recommendations of President Muhammadu Buhari.

Thereafter, Governor Buni was sworn in by the Minister of Justice and Attorney-General of the Federation (AGF) Abubakar Malami.

Similarly, Senator John Akpan Udo-Edehe was appointed as the secretary of the caretaker committee.

Briefing State House correspondents at the end of the meeting, Governor Buni clarified that all the decisions made regarding the governorship primary election in Edo State have been ratified.

He gave an assurance that he would not allow any crisis in the party to fester, adding that the NEC meeting convened in continuation of the last adjourned meeting where all notices were served appropriately.

The governor stressed that nobody was targeted with the meeting and that the party still respects and recognises Mr Bola Tinubu as a member and founding father of the APC.

He disclosed that the committee has a six-month lifespan within which it would conduct the election of the new NWC members.

Earlier, President Buhari told party chieftains at the meeting that mutating disagreements could lead to the self-destruction of the party with dire consequences.

The President warned that the gains of the APC could be reversed as conflicts overshadow the primary objective of service to the people.

He, therefore, appealed to party members to refocus on the larger picture and place more emphasis on uniting the APC.